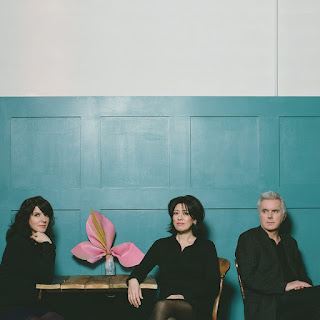 They said Ciao! but they're back now. It's been 20 years since Lush released an album, but original members Miki Berenyi, Emma Anderson, and Philip King have reunited for a series of concert dates in America, England, and Europe. Tickets went on sale today for their September 18 show at The Vic in Chicago; other gigs are scheduled for Los Angeles, San Francisco, Philadelphia, and London. Lush released a five-disc box set in December featuring all their album tracks, along with B-sides, radio sessions, and previously unreleased material.

The McCartney Years, a three-hour, 40-song Paul McCartney tribute involving several musicians and vocalists, comes to the Metropolis Performing Arts Centre in Arlington Heights tomorrow night. The concept is to faithfully create a live performance exactly the way Sir Paul would have done it in the mid-1970s. Tickets are $35, $40 for stage tables. The show starts at 7:00 PM.

All Things Must Pass: The Rise And Fall Of Tower Records will be shown this Sunday, January 24 at 3:00 PM and Tuesday, January 26 at 6:00 PM at the Gene Siskel Center in Chicago. It's director Colin Hanks' documentary on the once successful record store chain, as well as the music industry in general.

There's a double bill of Go Time! with Paul Coady and The Edsel Brothers tomorrow night at the Uptown Lounge.

There will be a special tribute to Gary Loizzo and The American Breed when local PBS station WTTW presents the Cornerstones Of Rock: American Garage on May 17 at the North Shore Center in Skokie. Loizzo, who sang lead on "Bend Me, Shape Me" before moving on to a successful career as a producer, passed away earlier this week. Performers at Cornerstones include The Ides Of March featuring Jim Peterik; The Buckinghams featuring Carl Giammerese and Nick Foruna with special guest Dennis Tufano; The Cryan Shames; The New Colony Six featuring Ray Graffia, Jr. and Bruce Mattey with special guest Ronnie Rice; and The Shadows Of Knight featuring Jimy Sohns.Tickets are still available through Onesti Entertainment Arcada.

American Buffalo, Mary-Arrchie's final production, opens next Thursday, January 28 at the its Angel Island home base on Sheridan Road. This is a prime opportunity to experience the critically acclaimed storefront theatre in all its in-your-face glory, with founding member/Artistic Director Rich Cotovsky in a major role. Mary-Arrchie is honoring Cotovsky by offering a limited edition Rich Cotovsky Died For Our Sins t-shirt (it's based on the company's annual Abbie Hoffman Died For Our Sins festival) with all proceeds going to the final season budget.

The Nicholas Tremulis Orchestra with special guest Jay O'Rourke will be performing next Friday, January 29 at SPACE in Evanston.

Los Lobos may not have been inducted into the Rock And Roll Hall Of Fame, but they've created an impressive body of songs like, "Will The Wolf Survive," "Shakin', Shakin', Shakes," and "Set Me Free (Rosa Lee)." They'll be performing with special guests Ballet Folklorico Mexicano on Sunday, February 21 at the McAnnich Arts Center at College of DuPage.

Tony Award nominee Mary Bridget Davies will be in the lead role when A Night With Janis Joplin comes to The Chicago Theatre on March 6. The show is being described as "a musical journey celebrating Janis Joplin and her biggest musical influences."

Tickets go on sale this coming Tuesday for the July 19 Rock And Roll Three For All concert featuring Heart, Joan Jett, and Cheap Trick at First Merit Bank Pavilion on Chicago's lakefront. As the name suggests, all three acts are Rock And Roll Hall Of Fame inductees.

The Hits just keep on coming. I received a message from Pat Deane, the lead vocalist for the late 1970s/early 1980s Chicago band Scraps regarding my review of the Scraps Vol. 1 digital album that's now available on iTunes. The song the band contributed to Loop compilation album was "New Robots," and yes, there will a Vol. 2 will become available in the near future.

A rock music-infused version of Twelfth Night, created in the UK by Filter Theatre in association with the Royal Shakespeare Company, will be at the Chicago Shakespeare on Navy Pier theater from March 1 through March 13.
Posted by Terry Flamm at 9:15 PM