Javier Escovedo - Kicked Out Of Eden 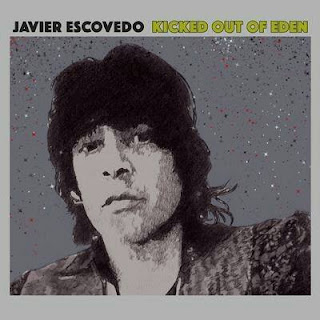 Kicked Out Of Eden is singer-guitarist Javier Escovedo's second solo effort but his musical history goes back long before his solo debut City Lights came out in 2012. He fronted the The Zeros, one of the most influential bands from California's late 1970s punk scene, and later joined his brother Alejandro (of Rank and File fame) in the critically acclaimed Austin, TX-based True Believers. Escovedo brings loads of energy to this latest effort, and he's backed by a first-rate band.

Brad Rice serves as Escovedo's guitar-slinging partner in crime, particularly on the sexy tracks "Beaujolais"and "Good And Bad," while Matt Hubbard's honky-tonk piano playing adds to the party atmosphere of "Downtown." Kicked Out Of Eden also has its quieter moments, like when vocalist Chrissy Flatt joins Escovedo on "Driving Around," an appealing song reminiscent of some of Feist's guest shots with Wilco. The catchy "This Side Of Nowhere," with Flatt once again helping out on vocals, is a compelling look at a crumbled relationship. The hard-rocking and imaginative "Gypsy Son"could easily serve as Escovedo's theme song.
Posted by Terry Flamm at 9:40 PM