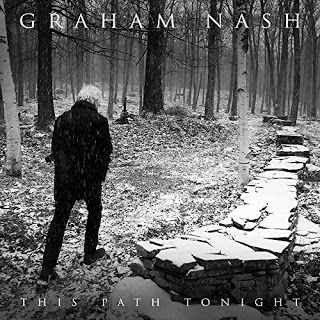 When The Elvis Brothers sang, “I got big ideas on my mind” they could have been talking the start of a new year, when many people vow to put dreams or plans in action. The annual Broken Hearted Toy Big Ideas column offers a mix of upcoming events regarding entertainers, and in some cases, a suggestion for them. Once again, a few enterprising people responded to my request for submissions by sending me their own ideas. Their entries are in blue copy.

Graham Nash: The singer-songwriter will release This Path Tonight, his first solo effort in 14 years, in mid-April. It's already available for pre-order on Amazon in CD, CD/DVD, vinyl, and digital formats. Nash will embark on a U.S. tour that starts on January 27 in Ponte Vedra, FL, with additional stops in Atlanta, Nashville, Philadelphia, New York, Vienna, VA, and Austin. Chicago isn't on the list yet, but there might be additional dates. Suggestion: In noted rock critic Ken Sharp's Play On! Power Pop Heroes Vol. 1 book, Nash is quoted as saying, "About three years ago someone sent me a CD with 60 tracks of The Hollies recorded at the BBC. - - - I'm gonna work on an old Hollies album with [Hollies vocalist] Allan Clarke and I want to do a greatest hits of The Hollies from mine and Allan's point of view." It would be great to see that idea come to fruition in a boxed set.

The Hollies: The British Invasion band has carried on long after the departure of Nash and Clarke. The current lineup, led by original members guitarist-vocalist Tony Hicks and drummer Bobby Elliott, continues to tour and has 2016 dates throughout Europe. Suggestion: Add the United States to this tour, and Chicago in particular. Also, everyone involved with the band over the decades, including Terry Sylvester, Bernie Calvert, and Eric Haydock, should set aside their differences and do at least one all-encompassing reunion show.

Submitted by Dan Pavelich: The Bradburys have signed a deal for a vinyl single with Frodis Records, out of Houston, TX. They are a new reissue/archival label, and will be putting out two of our vintage tracks, "Marilyn" b/w "Hello Hello." I'd also like to reissue a couple of Lucille Ball Christmas radio shows, from her "My Favorite Husband" show on my own label, Vandalay Records.

Saturday Morning Flashback on WXRT: Each week, host Wendy Rice (or occasionally Johnny Mars or Marty Lennartz) focuses on a different year with a selection of songs, observations, and special reports from other XRT staff members. Suggestion: Extend the amount of years that Flashback covers forward to at least to 2005, and backward to 1966. As noted by author John Savage in his book 1966: The Year The Decade Exploded, this was one of the most important years in rock and roll history. The January issue of the UK rock mag Shindig is devoted to 1966, and the year is also featured in the The History Of Rock magazine series published by the people at NME and Melody Maker.

The Smithereens: Later this month, the veteran New Jersey band will release of ESP3CIALLY F0R You, a 30th Anniversary celebration of the album that gave the world classic power pop songs like “Blood And Roses,” “Behind The Wall Of Sleep,” and “Strangers When We Meet.” The 47 tracks will be available as a two-CD set or as a download, and will include demos, acoustic versions, and live performances. This precedes a 2016 tour in which The Smithereens will perform the original Especially For You in its entirety, and the release of a brand new album of original tunes that’s coming out next Halloween.

Submitted by Dana Jones: The focus for Dana Jones Art [located near Tulsa, OK] is shifting from a retail gallery venue to a full-fledged art studio. This effort begins with the purchase of a new etching press and equipment to get back to printmaking as a medium. I'm also putting my art out for more public scrutiny by entering juried exhibitions. To this effort, I already have a new series underway that mingles watercolor and weaving. In addition to this, I'm investigating ways to make my art more accessible through reproduction. And I have a children's book in the works. My goal is to self-publish it by Christmas 2016. I wrote the story and will be illustrating and designing it myself.

Cheap Trick: The legendary Chicago band has a new album titled Bang Zoom Crazy . . . Hello coming out on April 1, just seven days before it will receive a long overdue induction into the Rock And Roll Hall Of Fame. So far, the official website only lists one live date, which takes place on March 5 in Plant City, Florida.

Submitted by 'Boris': Continued growth and worldwide exposure for 'Music That Deserves To Be Heard' on the Secret Weapon Radio Show. I'm amazed at all the countries that tune in regularly. Thanks for your support as well!

Justin Fielding: The Boston-based filmmaker's documentary The Power Pop Movie is scheduled to be released this year. International Pop Overthrow Founder/CFO David Bash and Bruce Bodeen (Pop Geek Heaven, Not Lame Recording Company) are on board as Executive Producers, and Fielding continues to film interviews with some of the genre's best known musicians across the country.

The Valley Downs: Led by bassist-vocalist Mike Galassini from the longtime power pop band 92 Degrees and his wife vocalist Marianne Shimkus, this Chicago-based group has a new single called "The Prettiest Girl In Salem." Hopefully, it's from a brand new album that will be released in the near future.

The Plastiscines: LP1, the 2007 debut from this Parisian quartet of teenage girls was full of authentic garage rock tunes. They've swapped out a few members and dabbled in tech music on a few releases since then. Vocalist Katty and drummer Ana's new side project Arizona Twins finds them exploring a harder, guitar-driven sound, if the short video snippets on Facebook are any indication.

Northwest Illinois Chapter of SCBWI:  Since joining this Society of Children's Book Writers and Illustrators group, I've finished three novels that I’m currently shopping to agents, and I'm well on my way on a fourth book. Members Kym Brunner, Cherie Colyer, Susan Kaye Quinn, Mike Kelley, Marian Manseau, Terri Murphy, and Katie Sparks have had books published, and Veronica Rundell is in serious talks with agents about her YA novel. Each of these writers are also highly skilled at offering advice. Look for more successes coming from this group in 2016.

Mary-Arrchie Theatre: The critically acclaimed storefront theatre company is wrapping up its final season (after 30 years of giving Chicago cutting-edge productions) the way it began, with a production of a David Mamet play. This time, it will be American Buffalo, with founding member and Artistic Director Rich Cotovsky, along with Rudy Galvan and Stephen Walker. Carlo Lorenzo Garcia is directing this production, which runs from January 28 through March 6.

Trolley: The Milwaukee-based power pop masters will release their next CD Caught In The Darkness on January 12th.

Whitewolfsonicprincess: The alt-rock band just wrapped up a funding campaign for its upcoming release The Shadow Of The Marigold. Founding members Carla Hayden and James Moeller also perform with the Black Forest theatre group, and frequently draw from that experience to create inventive textures in their music.

Phil Angotti, Casey McDonough, John San Juan, Holly Senchak and Metropolly, The Webstirs, and Androgynous Moustache: Each year, these Chicago area musicians pay tribute to famous rock and roll acts for the Halloweekend event. Individually, (Angotti and Androgynous Moustache in particular) they perform tribute shows throughout the year. Suggestion: Follow fellow Chicago tribute band EXPO '76's lead in expanding to the northwest suburbs. Of course, this is a two-way street that will require suburban club owners to be more adventurous as well.

Stephanie Kuehnert: The author's novel I Wanna Be Your Joey Ramone has been optioned by producers who plan to turn it into a movie. This backstage look at a young woman who emerges as a counter culture rock star while battling substance abuse and family issues is bound to fascinating fon the big screen.

Jeff Kelley: The writer and host of the monthly Coffee With Jeff internet show (a new episode just appeared today) and weekly podcast has also collaborated with artist David Metzger on an original sitcom called Zombie Grandma for Elgin’s annual Nightmare On Chicago Street Halloween festival. I’ve worked with Kelley on the Coffee and the Nightmare projects, and hope to continue to create a new series with him.
Posted by Terry Flamm at 10:18 PM

So thoughtful of you to share our big ideas here! Here's to hoping 2016 is our year!
Best,
V:)