Hey, Man! Thanks For All The Great Music! 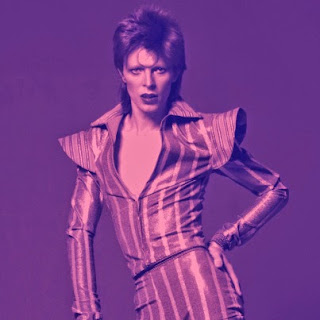 My first experiences on the Chicago rock club scene took place in the mid-1970s. Most of the cutting-edge bands included a few David Bowie tunes in their sets when they played places like Mother's or Rush-Up in the Rush Street area, or Harlow’s on the city’s southwest side. Bowie’s presence could be felt everywhere as an exciting new movement rattled the world of local entertainment. Bowie himself would continue to set trends a few years later when punk and new wave became popular, and he remained an innovator throughout the rest of his career.

On the day the world learned that Bowie had left us, a review of his latest album ran in the Chicago Tribune. Critic Greg Kot, who couldn’t have foreseen the irony of this situation, praised Blackstar as “one of Bowie's best post-1980 albums” and concluded, “at age 69, Bowie remains focused on the future and all its uncertainty.” On WXRT this morning, Lin Brehmer and Mary Dixon noted that only in retrospect, are people discovering a certain theme running through Blackstar. As George Harrison had done, Bowie’s last recording was a reflection on his own death.

I never had the opportunity to see Bowie in concert, so my strongest memory of him is the David Bowie Is exhibition that ran at Chicago’s Museum Of Contemporary Art in 2014. The following is a reprint of a review I posted on September 29, 2014.


As of tomorrow, the David Bowie Is exhibition will have been at the Museum Of Contemporary Art - Chicago, its only stop in the United States, for a week. Hundreds of people—a fair amount from around the country—have already checked out this multimedia celebration of one of rock’s most distinctive stars. Having gone on this past Saturday, I can join the chorus of those singing the praises of David Bowie Is.

It’s easy to come away from this show feeling that Bowie made good on his goal of being, “an instigator of new ideas.” (I wanted to make more of that particular quote, but a Google search revealed that other writers, including the Chicago Tribune’s Steve Johnson, had already beat me to it. David Bowie Is seems likely to have two other effects on those who experience it. One: A hunger to delve into Bowie’s music and films. Local radio station WXRT tapped into that desire by airing a vintage Bowie concert this past Sunday night. Two: An appreciation of one’s own artistic endeavors and a renewed urgency to explore them further. It would probably help to already be creatively inclined to have that second reaction, but who knows? Maybe some absolute beginners will spring from having visited this exhibition.

An introductory message on the audio portion of David Bowie Is, delivered via GPS-equipped headphones, suggests it will take about 90 minutes to complete the show. It could easily take longer for those intent on savoring every item, depending how much of a crowd is present at the time. The collection includes samples of Bowie’s early art work; toys he played with when he was a boy; stage bills from local theatre productions he performed in; and handwritten lyrics (at least one with a stick figure doodle) from the songs he recorded. There was also a promotional poster showing Bowie as a second-tier act for a concert featuring T. Rex and Roy Harper.

All of this is attractively staged and augmented with colorful and imaginative special effects; such as a large neon sign stating, “David Bowie Is Crossing The Border.” The most striking aspect of the exhibition is the pairing of groundbreaking rock videos like “Blue Jean,” “Ashes To Ashes,” “Let’s Dance,” and “Life On Mars” with the actual outfits Bowie wore for the them. Elsewhere, a separate room served as an intimate movie theatre showing clips from the films Absolute Beginners; The Man Who Fell To Earth; Labyrinth; Merry Christmas, Mr. Lawrence; and Prestige; as well as from the stage production of The Elephant Man.

The rock videos and film/theatre clips offer the most compelling evidence of Bowie’s versatility and charisma as a performer. Every facial expression, vocal inflection, pause, and mannerism seems devoted to embodying the role he has taken on. At this point, there’s no indication Bowie will come to Chicago to visit this exhibition. Reportedly, he’s busy working on songs for another new album. Further proof that Bowie is always creating.