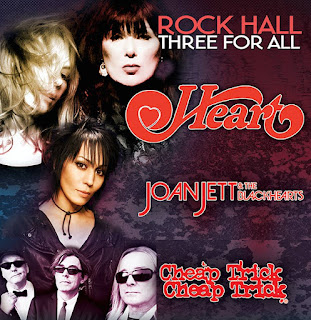 The Rock And Roll Hall Three For All tour featuring Heart, Joan Jett, and Cheap Trick comes to Chicago this summer with and outdoor gig on July 19 at First Merit Bank Pavilion at Northerly Island. That's six days before my birthday, but a good reason to start celebrating early. Other cities on the tour include Cincinnati. Kansas City,  Phoenix, and Dallas.

There's a double bill of Go Time! with Paul Coady and The Edsel Brothers coming up on January 23 at the Uptown Lounge.

The Handcuffs will perform their first gig of the year on February 5 when they share a triple bill with Razorhouse and the self-described power trombone trio Les Vikq at the Township bar on Chicago's north side.

The latest cold snap in Chicago won't keep Cubs fans from celebrating with their team this weekend. Particularly since the annual Cubs Convention is being held indoors at the Sheraton Grand Hotel. The event is sold out, but you can still get a taste of the festivities when WXRT air personalities Lin Brehmer and Marty Lennartz join Chicago Cubs announcer Len Kasper for a live broadcast that will air on the station tomorrow from noon to 3:00 PM. Special guests will include Ryne Sandburg and Kris Bryant.

Also at XRT, this week's Sunday night concert will be a 1990 David Bowie performance recorded in Tokyo. If you don't live in Chicago, you can stream it on the station's website, starting at 8:00 PM.

The Signal Ensemble Theatre has also decided to close down. Its last production, Heidi Schrek's The Consultant is directed by the company's driving force Ronan Marra, and runs from January 22 through February 20.

All Things Must Pass: The Rise And Fall Of Tower Records will be shown on Sunday, January 24 and Tuesday, January 26 at the Gene Siskel Center in Chicago. It's director Colin Hanks' documentary on the once successful record store chain, as well as the music industry in general.

Singer-guitarist Christopher David from the Magatha Trysty band will be showcasing songs from his solo debut The Houdini Tapes at a February 27 show at The Elbo Room on Lincoln Avenue.
Posted by Terry Flamm at 11:27 PM