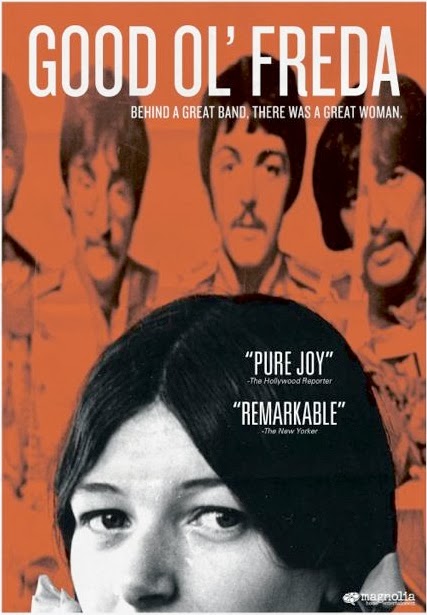 Freda Kelly’s story is a prime example of how life can sometimes trump anything created by a novelist or screenwriter. Picked by Brian Epstein from a multitude of love-struck teenage girls who hung out at The Cavern Club in Liverpool, she became his full-time employee and secretary of the Official Beatles Fan Club. For 11 years, Kelly had a first-hand look at the rise and fall of the most important rock band in history. How well she responded to that amazing opportunity is the subject of the new documentary Good Ol’ Freda.

The friendly and familiar tone of the title fits this woman perfectly. Kelly’s easy-going manner enabled her to weather Epstein’s notoriously volatile moods, connect with fans on a truly emotional level, and become like one of the family to The Beatles and their parents. But as the band became overwhelmingly popular and Epstein found it necessary to bring in more young women to help open the mail, it was Kelly who made sure the work didn’t dissolve into a gigglefest. And she wasn’t above sacking anyone who proved untrustworthy.

Good Ol’ Freda uses archival film and photos of The Beatles’ early days, along with a series of interviews with Kelly at home and while visiting noteworthy sites like the Empire Theatre in Liverpool. There is also sporadic commentary from a few of her contemporaries on how dedicated she was to her work and The Beatles. Kelly’s sense of discretion and loyalty is a running theme throughout Good Ol’ Freda. She could have made a fortune by writing a tell-all account of the Fab Four’s inner circle, but has remained out of the limelight for decades instead.

On a few occasions when she’s asked to comment on a delicate matter in the documentary, she smiles coyly and insists some things should remain secret. Most of her recollections are upbeat; like how much John, Paul, George, and Ringo enjoyed signing autographs and were willing to accommodate even the more unusual requests from fans.

“Nothing was a problem,” Kelly recalls of the lads’ genial attitude.

Kelly initially used her home address to receive fan mail until her father objected. She visited Starr’s mother once a week for tea, and got dancing tips from Harrison’s father. She was also along for the ride when The Beatles were devastated by the death of Epstein, and when the band began splitting apart. For the first time in her career, she felt the need to shade the truth, telling members of the media that The Beatles were doing fine. Still, she’s come away with a deep respect for the four musicians who weren’t much older than her when she first met them at The Cavern.

“I’m very proud that I worked for them,” Kelly states at the end of Good Ol’ Freda.

Brian Epstein received a long overdue induction into the Rock And Roll Hall Of Fame this year. It’s often been said that he saw something in the young Beatles that so many other people in the music industry had missed. Apparently, he knew something about hiring secretaries as well.
Posted by Terry Flamm at 10:15 PM