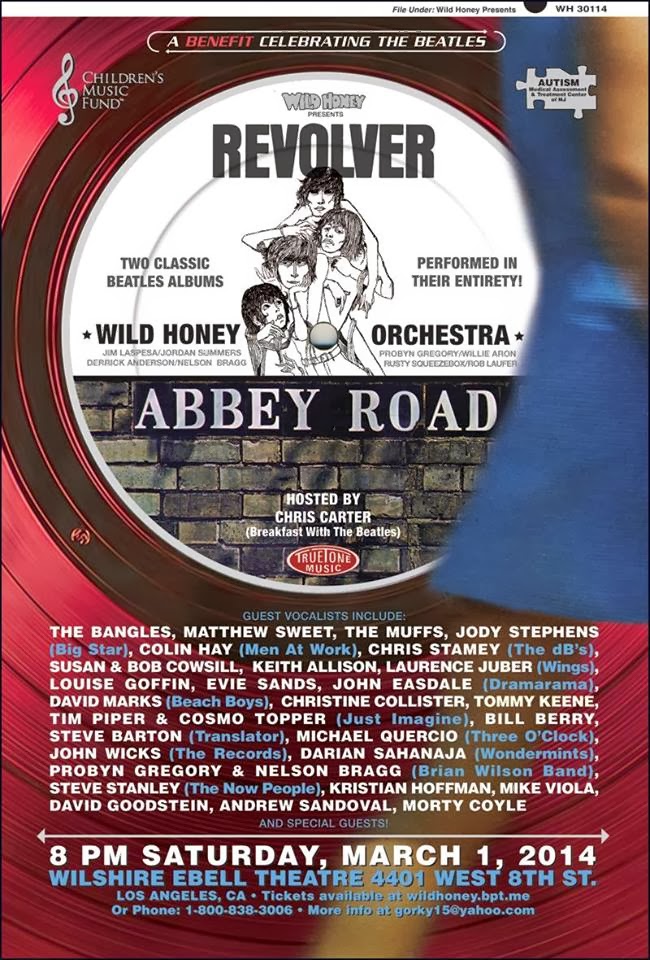 In a year already overflowing with tributes to The Beatles, here’s another worthy entry. If I lived in Los Angeles, I know I would be at the Wilshire Ebell Theater on Saturday, March 1st for Wild Honey Presents: The Beatles’ Revolver & Abbey Road to Benefit the Autism Think Tank and the Children’s Music Fund. The Wild Honey Orchestra is comprised of drummer Jim Laspesa; bassist Derrick Anderson; guitarists Rob Laufer, Rusty Squeezebox, and Andrew Sandoval; keyboards players Darian Sahanaja and Willie Aron; percussionist Nelson Bragg; horn players Probyn Gregory and Sarah Kramer; trumpet player Dan Clucas; sax players Paul Pate and Seung Park; and trombone player Masha Petrowizky. Power pop fans will no doubt recognize some familiar names among those players, and Wild Honey has lined up an impressive collection of guest vocalists to help recreate the two Beatles LPs. You might even call them Broken Hearted Toy all-stars if this blog was involved with the show.

Ticket prices range from $25 to $100, which is certainly reasonable considering the talent involved. Plus, the money is going toward two worthy causes, the Autism Think Tank and the Children's Music Fund.
Posted by Terry Flamm at 11:31 PM