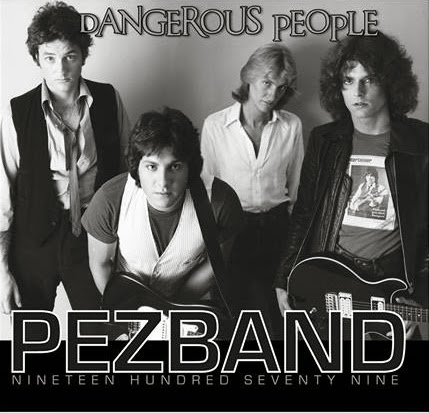 Pezband, the legendary power pop group that gave us classics like “Baby, It’s Cold Outside” and “Please Be Somewhere Tonight,” recently made a welcome return to the Chicago club scene. And now there’s good news from them on the recording front, in the form of Dangerous People. This collection of previously unreleased tracks came about after original Pezband engineer John Pavletic discovered material recorded in 1979, and contacted lead vocalist-guitarist Mimi Betinis. The duo spent months bringing those recordings up to modern standards. The results are now available on Air Mail Recordings, the same Tokyo-based label that released Pezband’s three LPs and two EPs on CD back in 2005.
The opening track “Back Within The Arms I Love” sets the tone for energetic guitars, irresistible melodies, and lyrics concerning romantic relationships. “Goodbye Forever,” an effervescent song about a couple escaping to a moonlit paradise, sounds like it could have arrived via the original British Invasion, while “She’s Alright” is reminiscent of The Outfield, a UK band that scored hits in the 1980s. The high-speed arrangement on “Anything For Fun” suits this tale of people discovering that life in the fast lane eventually loses its thrills.

Betinis has a classic rock voice similar to Cliff Johnson of Off Broadway (Johnson was Pezband’s vocalist back in its earliest club days) and combines with bassist Mike Gorman and drummer Mick Rain on harmonies. Tommy Gawenda, along with Betinis, supplies guitar firepower, particularly on the more modern-edged title track and “Death Is A Lover.” Dangerous People also includes two live tracks: “Black Magic,” which the band dedicates to Fleetwood Mac, and a version of “I’m Leaving” that’s different from the one of the red vinyl EP Thirty Seconds Over Schaumburg.
Posted by Terry Flamm at 9:50 PM