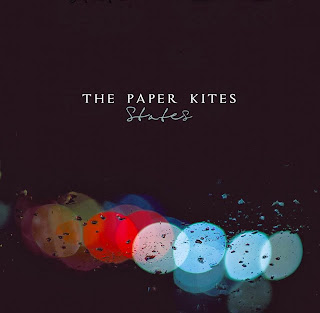 Looks like Slumgullion will have to wait until tomorrow. In the meantime, here’s a review that originally appeared in the Illinois Entertainer. Actually, this band should have been included among the Honorable Mentions on my Favorite Releases of 2013, so I went back and added them to the list.

The Paper Kites explore a more textured sound on their full-length debut States than they did on two previous EPs. There’s still a definite indie rock vibe to the Australian quintet’s material but it’s augmented by strings, offbeat percussion, and ethereal keyboards. The 13 tracks are most notable for the way singer-guitarist Sam Bentley, singer-keyboards player Christina Lacy, and guitarist-singer David Powys envelop the listener with their lush vocals.

Chief songwriter Bentley creates minimalist lyrics that sometimes describe romantic relationships but elsewhere hint at more complex subject matter. “You I long to keep” he writes on “In Reverie,” a catchy, new wave style number that finds him sharing lead vocals with Lacy. The somber “Gates” seems to depict a soul awaiting judgment with lines like, “When I take no more and feed the ground/Mercy for my flaws, don’t send me down.” The exotic “Living Colour,” one of  The Paper Kites’ more ambitious efforts, features Bentley and Lacy’s interwoven vocals floating above a blend of classical strings and hard rock guitar.
Posted by Terry Flamm at 11:05 PM