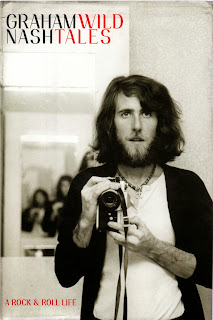 In Wild Tales, Graham Nash doesn’t waste time in getting to the big bang event most readers will be eager to hear about: His first encounter with David Crosby and Stephen Stills. After that opening chapter, Nash travels back to his childhood to begin this entertaining autobiography. It’s not a journey delivered in strict chronological order; he sometimes follows a narrative thread over the course of a few years before slipping back again to pick up another tale. Nash employs an easy-going writing style that places the reader on a bar stool beside him, most likely in an English pub. It’s a buddy-to-buddy account, with a fair amount of nudge-nudge, wink-wink material.

Nash must have known that at least some of his recollections would cast him in an unfavorable light. After all, he spent a good portion of his musical career chasing mini-skirts and consuming (although never becoming addicted to) illegal drugs. He doesn’t excuse or condemn this past behavior; Wild Tales is filled with let-the-chips-fall-where-they-may observations of an era of free love and mind-altering experimentation. As he simply states in the Acknowledgments, “This is how I remember it.” Later in the book, he notes the disastrous effect that too much cocaine use had on the ability of Crosby, Stills and Nash to record or perform music. He also settles down with Susan Sennett, who becomes the love of his life.

Throughout Wild Tales, Nash’s core values come across loud and clear; his obsession with harmony singing, his devotion to friends, his strong bond with his parents, and a passion for social justice. Like George Harrison and John Lennon, he became one of the pioneers of using music to reach out to others in need, whether it be in the form of writing a new song, or putting together benefit concerts.
Posted by Terry Flamm at 10:04 PM