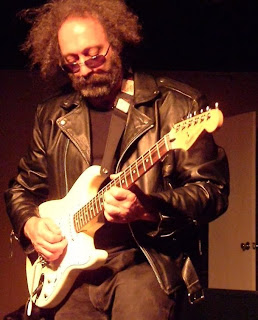 Portrait of the man who made it possible for me to perform skit comedy for over 20 years.
Happy Birthday, Rich Cotovsky. (Photo from his Facebook page.)

A few more bits from the world of entertainment.

Happy Birthday to Rich Cotovsky, Artistic Director of the Mary-Arrchie Theatre; founder of the annual Abbie Hoffman Died For Our Sins festival; Abbie Hoffman impersonator; director; actor; and Chicago legend. Famous In The Future, the comedy group I performed with for 20 years, could not have existed without him. I’m not sure he would want to take responsibility for that, but I express my thanks to him anyway. It’s impossible to count the hours of fun I’ve had at the Mary-Arrchie Theatre over the years.

Fest For Beatles Fans did a post on Facebook yesterday stating there’s a rumor going ‘round that Paul McCartney and Ringo Starr will perform together on the Late Show With David Letterman Show at some point in early February. Letterman’s nightly program is taped at the Ed Sullivan Theater, the place where The Beatles made their monumental first impression on American TV viewers 50 years ago.

As mentioned earlier here before on BHT, The Smithereens will be recreating The Beatles’ February 11th, 1964 Washington, D.C. concert as part of the Fest For Beatles Fans celebration in New York. According to a recent Facebook post from guitarist-vocalist Jim Babjack, the band plans to release a recording of their performance of The Beatles’ concert event. It will have 12 songs, including “Roll Over Beethoven,” “All My Loving,” and “I Want To Hold Your Hand.” Babjak promises information on how to order a copy will be coming soon.

I haven’t been able to find anything official on this, but supporters of WXRT DJ Tom Marker are proclaiming on his Facebook page that he’s been reinstated as an air personality on the station. If that’s the case, then congratulations to all those who rose up in anger when he was let go. Marker’s followers extend beyond the rock and roll scene because of his decades of supporting blues music in Chicago. One thing is for sure; Marker will host his annual Blues Breakers Blues Of The Year this Monday night on WXRT at 9:00 PM.

The Walker Brigade, a punk rock covers band that includes Jeff Charreaux from Ultraviolet Eye, will be performing next Friday, January 17th at 321 Lounge in Los Angeles, along with The Grrrls and Rachel Goodrich. When I reviewed Ms. Goodrich’s self-titled CD a few years back, I noted that, “At a time when quirky singer-songwriters are as common as snowflakes in a blizzard, Rachel Goodrich still stands out” and concurred with a press release description of her music as “vaudeville-inspired indie pop.”

The second annual Danstock Benefit Showcase to Raise Funds for Melanoma Research at the Robert H. Lurie Comprehensive Cancer Center of Northwest University of Northwestern University will be held on Thursday, February 6th at Lincoln Hall on Chicago’s north side. Planning for the event is still underway, but Band Called Catch, American Wolf, and DeXter, have already signed up to perform. Danstock came about last year when musician/producer Dan Stock decided to do something to help victims of the disease that was on the verge of taking his life. The benefit now lives on in his honor. The goal for the 2014 Danstock is to raise $40,000. Admission is $20, and there are VIP tickets available for $100.00.

And finally, a song to a certain New Zealand teenage singer, with apologies to Janis Joplin: