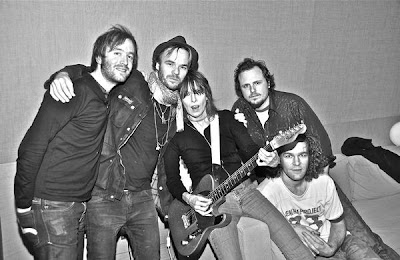 Note: The is post number 200 for this blog. I'd like to thank my wife Pam for setting it up for me. As I've said in the past, without her help, I'd be walking around, showing people my reviews on a chalkboard.

Chrissie Hynde seems to have a knack for collaborating with other musicians. Her vocals played an essential role in conveying the inspirational message of “Spiritual High (State Of Independence)” by Moodswings, and she joined forces with UB40 on the sexy “Breakfast In Bed” as well as on a fun cover of Sonny & Cher’s “I Got You Babe.” Heck, even her continuing reign as leader of The Pretenders could be viewed as a series of collaborations, considering the variety of genres she has successfully explored and the number of members who have been part of that band.

Now she’s created JP Chrissie & The Fairground Boys, along with Welsh singer-guitarist JP Jones. Chicago-area fans probably weren’t aware of Hynde’s latest project since it has only made a handful appearances in the Los Angeles area. That changed today when Hynde, Jones, and guitarist Patrick Murdoch dropped by WXRT today for a visit with DJ Frank E. Lee. The band played three songs from an upcoming CD called Fidelity. According to Hynde and Jones, the title is a pun on Fidel Castro since the band recorded the bulk of the CD in Cuba.

The songs performed in XRT’s studio this afternoon had spare, acoustic arrangements that would have sounded at home on the last Pretenders effort, Break Up The Concrete. It’ll be interesting to hear how these tunes sound with the full band when Fidelity drops later this summer. Hynde’s unmistakable voice led the way, but she traded lead vocals with Jones, and did some harmonies with him. The title track was the most energetic.

Hynde and Jones conceded they’re reversing the common method of promoting a new album, by performing gigs before its release. Still, they enjoy the freedom of doing things their own way. “Let’s get out there and do what we want to do,” Hynde said, describing the band’s approach.

They’ll be performing more shows in the near future. When Lee asked if the band might go back into the studio to tweak some things on Fidelity, based on the live shows, Hynde dismissed the idea.

“We’re already working on the next album.”