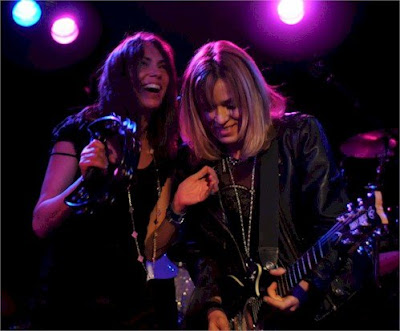 “Really? He doesn’t look a day over 40!” Photo from The Bangles Facebook page.

I made pizza for me and the wife tonight, but for the rest of you, here’s a buffet of various entertainment dishes.

This Dream Probably Won’t Come True: The Bangles are going to celebrate my birthday this year with a performance at Busch Gardens Williamsburg in Virginia on July 25th, as part of the “Illumi-Nights” concert series. Even if they don’t spring for my ticket and airfare, an advance copy of their upcoming CD would make a thoughtful gift. The Bangles will be at Busch Gardens on the 24th as well, and have a gig on July 9th at the Mandalay Bay Events Center in Las Vegas, as part of Lilith Fair. I had hopes of seeing The Bangles and The Go-Go’s at Lilith Fair in Chicago, but unfortunately, neither is slated for the Windy City stop.

Say Hello To Uncle Albert: Phil Angotti and Steve Dawson will live a little and be gypsies while performing Paul McCartney’s entire Ram album tomorrow (Saturday, May 8th) at The Viaduct Theatre on Western Avenue. Other musicians will be involved, including Tommi Zender and Casey McDonough. Angotti has built a solid reputation for staging these kinds of tribute shows, and this looks to be another winner.

Talkin’ ‘Bout Next Generation: Celtic Fest Chicago has switched months as well as locations this year. It will be held tomorrow and Sunday in Millennium Park. My wife Pam and I always check out the Next Generation Stage, which features talented young musicians from local schools like The Irish Academy of Music. There’s also a Dance Stage featuring some fancy footwork from Celtic countries like Ireland, Scotland, and France. The fest’s headliners are The Rogues and The Saw Doctors on Saturday, and The Elders and La Bottine Souriante on Sunday. Celtic Fest Chicago always has a fun, easy-going vibe, and includes food vendors, a kids area, and an art show, as well as lots of great music.

Chicago native Joe Jammer has traveled the world in an impressive career as a singer-guitarist, but never lost his love for the hometown sports teams. SOPRO Music has announced that Jammer just recorded a tribute to our hard-hitting hockey team, titled, “Blackhawk Battle Cry (Let’s Go Hawks!)” The song kicks off with the greeting, “Welcome to the Madhouse on Madison in Chicago” and goes on to declare, “Scream & shout, Let’s call it out/So loud we’ll raise the dead!” Hopefully, fans will have reason to sing along with Jammer for a while yet.

Tomorrow The Moon, the new sci-fi flavored rock band featuring Steve Gerlach of The Bad Examples, will be sharing a double bill with Mr. Gnome at The DarkRoom on Chicago Avenue a week from today. The show starts at 9:00PM.

Greasepaint It Black: Rolling Stones fans should be intrigued by Aftermath, a new play at Raven Theatre in Chicago, that deals with the mysterious death of Brian Jones in 1969. Mary Houlihan had an interesting interview with writer-director Ronan Marra in the Weekend section of today’s Sun-Times, that describes the amount of work and research that went into creating the play. Aaron Jones portrays Jones, while Nick Vidal plays Mick Jagger, and Houlihan notes both look amazingly like the real musicians. The play starts on Monday, May 10th and runs through June 6th.

Deja Vu Tutu: Back in the late 1970s, when I was editor of the local rock mag Metro Entertainment Calendar, one of the first punk bands I encountered was Tutu & The Pirates. Their off-the-wall songs about serial killers and Idi Amin (“Everybody objects just because I eat my subjects.”) earned them a loyal following, particularly at Mother’s on Division Street. I interviewed them for a cover story, and they turned out to be a very articulate bunch of guys. Tutu & The Pirates were featured in the recent You Weren’t There: The History of Chicago Punk 1977 - 1984 documentary, and are back with a brand new CD. They'll be performing with Da!, another one of Chicago’s pioneer punk bands, tomorrow at the Empty Bottle on Western Avenue. I recently heard from Lori Mikolon, who along with Linda Matlow and Roger Johnson, was one of the staff photographers for Metro Entertainment Calendar. She has fond memories of taking pictures of them, and like me, is glad to see them back. My, how time flies.