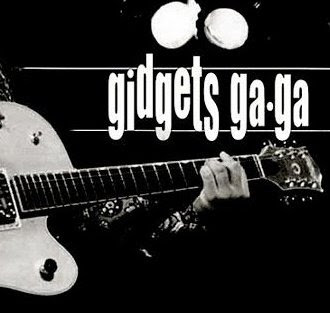 Darkroom Bar, at 2210 W. Chicago Avenue in Chicago is presenting an impressive showcase of power pop and indie music as part of One Magic Night - Shazam! The event is billed as “local bands doing a quick ‘best of’ 20 min. set.” The lineup includes Tenniscourts, featuring lead vocalist-guitarist Wes Hollywood of the band The Wes Hollywood Show, who recorded the power pop masterpiece Moonraker in 2003. Glam rocker TAFKA (The Artist Formerly Known As) Vince & The All-Star Bitch Band are on tap, as is the three woman, one man indie rock band Maybenauts, who are celebrating the release of their new Big Bang CD. The power pop trio Gidgets GaGa, who recently rocked International Pop Overthrow at The Abbey, will be holding a CD release party for The Big Bong Fiasco. Also watch for the wildly entertaining Penthouse Sweets; The Safes, a band that mixes hard-edged melodies and harmony vocals with punk exuberance; and the energetic power pop band The Sonnets, whose guitarist-vocalist Vee Sonnets will be celebrating his birthday. DJ Tankboy will also be there, as well as heavy metal maven/burlesque dancer Viva La Muerte, who will serve as hostess. Doors open at 8:00PM, and admission is free until 10:00PM. After 10, the ticket price soars to an astronomical $5.

Go Time has a gig tomorrow night at Silvie's Lounge on Irving Park Road. In addition to being a catchy power pop band who recently released its Speak CD, Go Time alerts its Facebook friends to the birthdays of famous rock musicians. I can think of at least a few Broken Hearted Toy blog posts that have been sparked by a Go Time Facebook birthday notice.

Being everybody’s Best Friend In The Whole World means you can celebrate your birthday any time you feel like it. So this year, WXRT morning personality Lin Brehmer will blow out the candles on his cake next Friday, May 28th at a Miller Lite sponsored special on-air celebration at the Arlington Park Race Track in Arlington Heights. Brehmer’s musical guests will be vocalist-guitarist Warren Haynes, who has worked with Gov’t Mule and Allman Brothers Band, and Chicago-based roots rocker Joe Pug. The DJ celebrated his birthday at the Park last August, closer to his actual birthday, and it was a lot of fun. News anchor Mary Dixon and Corporate Takeover Rep Kristin Kay were also at that bash, so hopefully, they’ll be back this year. XRT fans looking to celebrate Brehmer’s faux birthday with him can get free tickets at the station’s website.

Funny how? I frequently post CD reviews here that I originally wrote for a publication called Illinois Entertainer, with the kind permission of its editor Steve Forstneger and publisher John Vernon. I’ve been doing freelance work for I.E. since 1987. Forstneger has just started a blog called admused.blogspot.com, that takes a humorous look at the way popular music is used in commercial advertising. I’ve read his first few posts, and found them funny and thought provoking. And I’m not just saying that because he’s sending me the Hoodoo Gurus Purity Of Essence CD I’ve been whining for.

Former I.E. editor Michael C. Harris, who in addition to covering the music scene, was known for ticking off conservatives with his monthly Roadkill column, continues that rabble-rousing tradition with his blog of the same name. I’ll always be grateful to Harris for introducing me to Supergrass, whom he described as a, “Terry Flamm band if I’ve ever heard one.”

Guitar-driven indie rockers The Telepaths will be part of Rock and ‘Q II tomorrow afternoon, along with Los Lost Boyz and Table Of Meat. The bash will be held at The Mutiny on north Western Avenue from noon to 6:00PM.

Taft High School on Chicago’s northwest side will be the scene of a special Terry Kath Tribute on May 27th from 8:00 to 9:30PM. The former guitarist for Chicago will be honored by a concert featuring special guests musicians Danny Seraphine and Kenny Cetera (older brother of Pete) and producer producer William Guercio. The Chicago tribute band 25 or 6 to 4 will perform, and other musicians/friends of Kath are expected to attend. Tickets are $10. For information, check out http://www.terrykathtributeconcert.com/event.html

Singer-songwriter Ellen Rosner, backed by The Bubbly Creek All Stars, will be part of the Flesh Hungry Dog showcase at Jack Hammer on north Clark Street this coming June 4th. The event will be hosted by former Londoner-now-Chicagoan Gary Airedale, and will also feature Stewed Tomatoes and Pretty Good Dance Moves. Flesh Hungry Dog aims to bring live rock to the gay community.