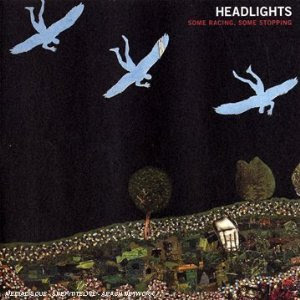 Some Racing, Some Stopping is the result of an established indie rock band deciding to pretend it has been transported back to the mid-1960s. Headlights, a trio consisting of singer/guitarist Tristain Wraight, singer/keyboards player Erin Fein, and drummer Brett Sanderson, fills its second full-length effort with catchy pop songs featuring Wraight and Fein taking turns on vocals, and frequently creating gorgeous harmonies. Still the CD’s deliberately low-fi production marks it as the work of a modern, cutting edge band.

Fein’s electronically altered voice on the title track underscores clever lyrics about literally listening to your heart, while Wraight’s hushed tone conveys the melancholy of time slipping away on “January.” “Cherry Tulips” is a fairy tale spun with poetic imagery and layers of vocals, while on “School Boys,” Headlights combine shimmering guitars with a string arrangement. Overall, Some Racing, Some Stopping is most enjoyable for energetic tracks like “Catch Them All” and “Market Girl.”