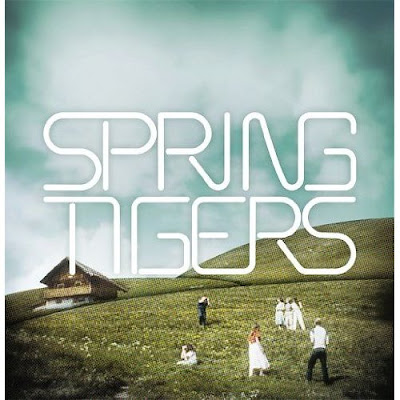 I’m still planning on reviewing some of the bands I caught last Friday and Saturday nights at International Pop Overthrow, but I’ve had to take care of some other freelance commitments first. In the meantime, here a review I wrote for the Illinois Entertainer a few months back.

It might seem odd that Spring Tigers strive for mass appeal while at the same time taking pot shots at modern society on their self-titled debut, but theses guys are into irony big time. They come from Athens, Georgia with former U.K. resident Kris Barratt on lead vocals and guitar, and might have taken their name from a Guided By Voices song. Barratt’s multi-faceted delivery helps underscore the satirical bite of the lyrics even when the band’s rapid fire vocal arrangements are overly familiar.

Spring Tigers back Barratt’s tongue in cheek adoration of beef jerky and other convenience store treasures in “Stripmalls In The Sun” with a warm and fuzzy arrangement reminiscent of The Flaming Lips. “Beep Beep” is a guilty pleasure that steals from New Wave bands like The Vapors and Oingo Boingo, while “Just Suggesting” is set to a frolicking keyboards arrangement with a dash of Queen. The high-speed “New Improved Formula” sounds like any number of current hit singles but Barratt rescues it with his distinctively Anglo vocals. Spring Tigers have obvious commercial ambitions, but at least they pursue them with style and a sense of humor.