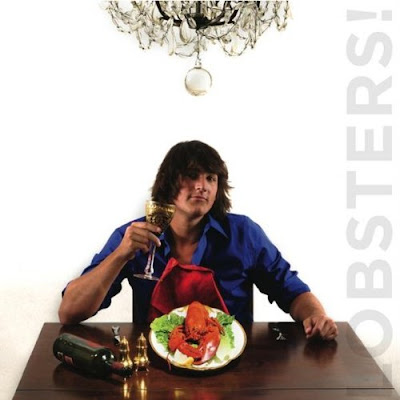 Toward the end of The Lobsters’ International Pop Overthrow set at The Abbey in Chicago about a month ago, vocalist-guitarist Matt Dodge asked the audience to clap along with the next number, and then added, “Come on, you’re not too old.” Ouch. Dodge and his band mates looked like they were in their late teens, which would have made them considerably younger than those of us in the crowd. Then the band blasted through the politically-minded “Currency” with a fury reminiscent of The Clash. The Lobsters were part of a multi-band line-up that day, and an earlier, quick visit to their MySpace page had led me to believe they would be too commercial for my taste. Their live performance blew away that misconception and the full-length debut Lobsters! also suggests these kids are more than all right.

Dodge, who started his first band at age 12, wrote all the material. He explores a variety of styles, starting with the infectious power pop of “DaniChick.” “My Life,” with its references to Nintendo and saving a princess, is as close as these guys get to aiming for the tween market, and even this track will win over older listeners with its catchy guitar and drum arrangement. The band slows things down and sounds more sensual on the satiric “Society’s Style,” and takes a more rough-edged approach on “In The City.” Dodge laces the dreamy fantasy of “Hawaii” with descriptions of A-List celebrities joining in on his tropical fun. The previously mentioned “Currency” is the strongest track, although “Then We Die,” which sounds like a blend of T Rex and The Who, is a strong challenger. Dodge is too young to have been around when the classic songs of the 1960s were being released, but he sure sounds like he’s been influenced by them.