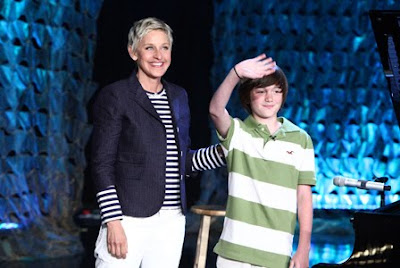 Ellen DeGeneres’s recent announcement that she’s forming a record company called eleveneleven brought me back to last November, when she landed the cover of Oprah Winfrey’s O Magazine. I did a post back then suggesting her next goal should be sharing the cover of Rolling Stone or Mojo with Little Steven Van Zandt. DeGeneres had recently created her own Internet music page, and I hoped she would use it to become an avid supporter of power pop and garage rock. To get the ball rolling, I started an Ellen Fans Who Love Power Pop group on her website. I soon abandoned it, accepting that I just couldn’t compete with Ellen Fans Who Love Justin Bieber.

But 2010 has seen The Ellen DeGeneres Show taking a new approach to booking music acts. Up and coming, less commercial artists like One Eskimo, Paramore, Vedera, LaRoux, Grace Potter & The Nocturnals, and Diane Birch have been showing up on a regular basis, as well as the better known but not exactly mainstream Weezer. DeGeneres has also stated that if she returns to American Idol next year, she’d like to see the show embrace a wider variety of genres. Even though eleveneleven seems like a quickly-hatched means to market preteen YouTube superstar Greyson Chance, I’m betting DeGeneres has been mulling over this enterprise for some time. She’s been on Facebook and Twitter soliciting suggestions for new music acts for her label, so hopefully, this will result in some worthy bands getting some well-deserved attention. Including power pop and garage acts.

Three bands will perform tonight as part of the Peace Fest Benefit at Nite Cap, located on Irving Park Road in Chicago. Funk/reggae band Flow Theory kicks things off at 10PM, followed by satiric rock trio Genral Patton & His Privates at 11PM, and Foster Home at midnight. Admission is $5.

The Bottom Lounge on west Lake Street will host The Fleshtones on June 12th, with an impressive supporting lineup that includes The Goldstars, Teenage Imposters, Tomorrow The Moon, and The Earth Program.

Listening to “Chicago” playing on WXRT yesterday afternoon, I had a premonition that disc jockey Terri Hemmert would have some news to share about Graham Nash. As it turns out, she did. Nash is being honored with a tribute CD titled Be Yourself that features modern bands covering all the tracks on his Songs For Beginners debut. It was released a few days ago on Grass Roots Records. According to Amazon.com and the websites This Is Book’s Music, Consequence Of Sound, and The Line Of Best Fit, the effort was put together by Nash’s daughter Nile, with help from (((folkYeah!))) concert promoter Brit Govea.

Participating artists include Nile Nash, Brendon Benson. Jonathan Rice, Robin Pecknold of Fleet Foxes, and Bonnie “Prince” Billy. Nash will be in the Chicago area on August 22nd for a Crosby, Stills, and Nash concert at Ravinia.

Speaking of WXRT, the station couldn’t have had better weather for its 93 Days Of Summer Kickoff Bash today at Arlington Park. With temperatures hovering in the mid-70s and the scent of barbecued food in the air, disc jockey Lin Brehmer and news anchor Mary Dixon hosted an outdoor fest that included acoustic sets from Joe Pug and Warren Haynes. Although Haynes, who has played guitar with The Allman Brothers Band as well as Gov't. Mule, clearly had the larger following, newcomer Pug also impressed the crowd with his emotional, Dylan-like material. Haynes thrilled his fans with inventive strumming and blues-inflected vocals. There was an easy-going, early afternoon ambience as Dixon passed out tubes of sunscreen and urged audience members to pass them around. “She’s such a mom!” Brehmer joked. The party also included lots of Rolling Stones tunes played over the sound system (the station was featuring The Stones today) as well as a parody of a Stones song celebrating the Black Hawks playing for The Stanley Cup.

Aftermath, the Ronan Marra play about Brian Jones and his squabbles with Mick Jagger and Keith Richards, has already sold out its entire run at The Raven Theatre Complex. According to a recent article in the Chicago Tribune by critic Chris Jones, the Signal Ensemble show will not be extended, although there is a chance they’ll bring Aftermath back later in the year.

Stones fans already have so much on their plates, including the new deluxe edition of Exile On Main Street, and they now can get their rocks off at the Performing Arts Center at Harper College in Palatine on June 24th when the acclaimed Tributosaurus becomes The Rolling Stones. Tickets are $9 - $12. Call 847-925-6100 for info.