My Second Weekend At IPO - Part One 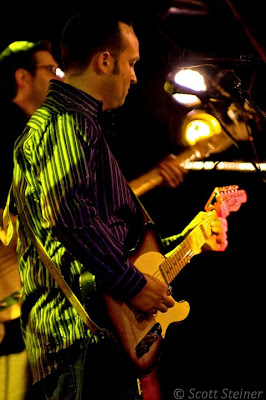 Photo of Aaron Fox & The Reliables by Scott Steiner, from the band's Facebook page.

Last Sunday was kind of like the day after Christmas for power pop and indie rock fans in Chicago. International Pop Overthrow 2010 had finished its ten-day run at four area clubs, and moved on to Milwaukee. As I said in an earlier post, I would have liked to have seen everything IPO had to offer in Chicago, but was only able to check out some shows on each of the two weekends. I discovered a number of new bands, talked to some musicians, checked in with IPO founder David Bash, and met Martha Westbrook, who represents power pop musician Paul Collins’ Beat Army. It was a great time. I’d also like to thank the lovely waitresses at The Abbey and Bird’s Nest for not cursing at me when I would hang out for hours and only buy one beer. (I did tip though.) Even if I wasn’t on a budget, my days of downing multiple drinks are long gone. Anyway, here’s my review of the showcase last Friday night at Bird’s Nest.

The opening act was singer-songwriter Blair Packham, who came all the way from Ontario to spin well-crafted tales like “One Hit Wonder” and “Paris Is Burning,” accompanied only by his acoustic guitar. With clever lyrics and an ability to nail the irony that seems to occur naturally in most romantic relationships, Packham came across as a blend of Jim Croce and Elvis Costello. His comments between songs were consistently funny, and as Bash noted afterward, he held the audience’s attention throughout the set, which isn’t always easy for an acoustic performer.

For this gig at least, The Effingways consisted of singer-guitarist Doug Bobenhouse backed by The Webstirs, who would play their own set a few hours later. Bobenhouse is a veteran of the critically acclaimed The Sun Sawed In 1/2, who will have a new CD out later this year. The Effingways project featured him belting out energetic pop songs reminiscent of Squeeze, so it was no surprise when he served up a first-rate cover of ”Up The Junction.”

The Elements of Style mixed shimmering and frenetic guitar playing in melodic songs like “Rock & Roll Is Dead.” Their music called to mind shoegazer bands like My Bloody Valentine at times, but with more energy (particularly on bass guitar) and a lead vocalist who consistently added an elegant touch.

The Help Desk came dressed to kill in suits and ties, and played songs from their Peel The Sun CD. Lead singer-guitarist Erik Widmark’s high vocals were backed by strong harmonies, keyboards, and shifting guitar tempos. There was a 1960s vibe to their music, particularly when The Help Desk launched into elaborate jams.

Aaron Fox & The Reliables packed more of a punch live than listening to the songs on their MySpace page would suggest (this was true of a lot of the IPO bands I saw) with strong harmonies and ringing guitars. The band had already staged a CD release party for Late To Soon at IPO Chicago a week earlier, and was invited back by Bash when one of Friday’s scheduled acts had to cancel. Lead singer-guitarist Aaron Fox proved to be a solid frontman, and was joined by guitarist Mike Burns and bassist Bob Vodick on some airtight three-part harmonies. In addition to original tunes like “Too Tired To Sleep,” the band delivered an impressive take on The Pixies’ “Here Comes Your Man.”

The Valley Downs, fronted by married couple lead vocalist Marianne Shimkus and bassist-vocalist Mike Galassini are long-time participants in IPO Chicago, and have traveled overseas to perform at IPO Liverpool. Their show Friday featured songs from a brand new four-song EP (their second), as well as a high energy rock tune that Galassini introduced as never having been played before. Like Galassini’s other band, 92 Degrees,The Valley Downs don’t perform as often as I’d like, so it was good to see them playing out, with some impressive new material. Unfortunately, I had to leave before The Valley Downs finished their set, and I missed The Webstirs entirely.

I’m hoping to post a review of last Saturday’s International Pop Overthrow at The Abbey in the next few days.