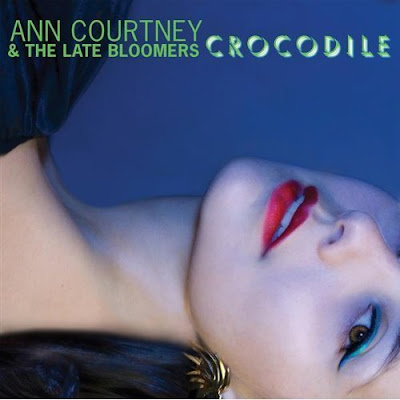 Ann Courtney, who fronts the Brooklyn-based Ann Courtney & The Late Bloomers, isn’t the first indie rock performer to cast a cynical eye toward romantic entanglements. What sets her apart from much of the current pack is the versatile way she belts out these caustic observations rather than settling for a one-note or gimmicky vocal style. Crocodile, the band’s full-length debut following a pair of EPs, also proves that she and David Giambusso are inventive guitarists.

The slinky “Perfect Medicine” is embellished with psychedelic strumming, and on the ominous “Shut Your Mouth,” Courtney and Giambusso harmonize to a slow-pounding beat. “Don’t Be A Fading Bruise,” a bitterly sarcastic dig at an abusive boyfriend evokes Liz Phair, while on “Strong Arm,” Courtney warns, “Don’t forget I know where you live” with a Chrissie Hynde snarl. Crocodile also offers the playful jazz arrangement of “Nothing On Me” as well as the raw garage rock of the ironically named “Nice And Quiet.