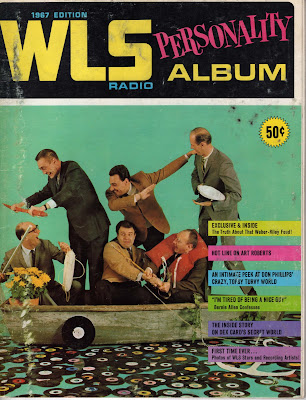 I was 14 years old in 1967 when I heard an ad on WLS saying the AM radio powerhouse was publishing its own Personality Album magazine, filled with photos, stories, and profiles of the on-air personalities.

I loved listening to the station, particularly night-time disc jockeys Ron Riley and Art Roberts, so I knew I had to have the magazine.

I wasn’t fluent in marketing jargon, so when the ad said Personality Parade would be available at news stands, I thought I could only buy one from an actual news stand. The nearest one was miles from our house, so I begged my Dad to drive me there. I soon learned I could have picked up a copy at any of the drug stores in my neighborhood. As much as I treasured that WLS Personality Album, it didn’t keep me from eventually losing track of it. The one in my collection now was purchased years later off eBay for considerably more than the original 50 cent asking price.

There wasn’t any advertising in the WLS Personality Album other than for the station itself. There were extensive bios for dee jays Clark Weber, Bernie Allen, Dex Card, Ron Riley, Art Roberts, and Don Phillips. Judging from the numerous pictures, these guys had a ball hanging out with all the big pop stars of the day. There are shots of Clark with Dave Clark of The Dave Clark Five; Allen with Paul Revere & The Raiders and Tony Bennett; Card with The Supremes and The Cryan Shames; Riley with Chad & Jeremy and The Hollies; Roberts with The Byrds, The Yardbirds, and The Lovin’ Spoonful; and Phillips with The Shangri-Las and The Turtles.

Often these bands would come into the studio for interviews. I remember Riley’s interview with The Hollies in particular. He was a funny guy who came across like he was friends with the band members, even though he claimed their British accents made them sound like they were calling their latest album Booterfly instead of Butterfly. One of The Hollies then pronounced the name Buttahfly, like an American southerner. Riley loved the Batman TV series and even managed to snag a cameo on it.

In addition to playing the Top 40 hits, Roberts featured comedy bits on his show, including his own Hip Fables and a spy spoof called Peter Fugitive that was created and voiced by Ray Van Steen. That’s probably what triggered my own fascination with making people laugh. I already had the writing bug at that point, unaware of how it would eventually lead me down such a frustrating and penniless career path.

WLS would later switch to an all-talk format. Back in 1967, it showcased an incredibly exciting time on the Chicago rock scene, when bands like The Cryan Shames, The Buckinghams, The Shadows Of Knight, The Mauds, and several others had hit songs. This era was captured on the 2131 South Michigan Avenue 2-CD set (See Vintage Rock, Chicago Style post in Archives, under November, 2009). The book Chicago Top 40 Charts 1960-1969, compiled by Ron Smith, is another helpful resource.

Index: The Buckinghams, The Hollies, WLS