CD Review: Curtains For You - What A Lovely Surprise To Wake Up Here 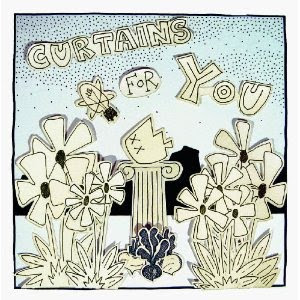 Seattle-based wiseguys Curtains For You take pride in describing their slightly off-kilter music as a mix of The Beatles, vaudeville, and The Muppet Show. The 10 tracks on their latest, sarcastically titled What A Lovely Surprise To Wake Up Here definitely evoke the bump and grind of vaudeville, but the ambitious vocal arrangements smack more of Queen or The Beach Boys. Eventually, Curtains For You pull the same vintage musical arrangement out of their straw hats one too many times, but there’s still a lot of fun along the way.

Lead vocalist-guitarist Matthew Gervais and piano player-vocalist Peter Fedofsky keep the irresistible melodies coming, and with guitarist-vocalist Mikey Gervais consistently chiming in, they create intricately layered harmonies. The Pet Sounds allure of “Dumb Angel” is spiked with lyrics like, “You are the dumbest angel that I’ve ever seen/They’re gonna clip your wings and then down you’ll go.” “Small Change,” with its aggressive horns and piano arrangement feels like a burlesque show, with a cryptic warning to old folks that their time is running out. The acoustic “Chain Link Fence” offers an interesting change of pace and Curtains For You prove they can play straight-up rock with the catchy “Road To Disaster.”