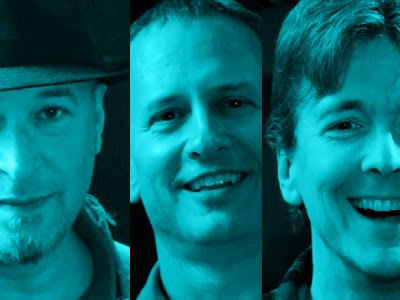 As I said on yesterday’s post, in a perfect world I would check out all of the International Pop Overthrow showcases being staged around Chicago this week. So far, I’ve only seen the ones that were held at The Abbey last Friday night and Saturday afternoon. Here is a review of the five bands I saw on Saturday.

The all-ages afternoon gigs have a different ambience than the usual club-going experience. For one thing, the sun is shining through the windows, and for another, there are kids on the premises. About midway through the showcase, a musician carrying his guitar case strolled into The Abbey, with a little girl trailing behind him, holding a stuffed animal. But the communal spirit I had noticed the night before, where members of different bands hung out and supported each other was still very much in evidence.

92 Degrees hasn’t recorded anything since its self-titled CD was released on Shoes’ Black Vinyl label in 1995. The power pop trio also put out the seven-song LP Money Makes The World Go ‘Round in 1990, but in recent years, its only live performances have been at International Pop Overthrow. It would be great to see 92 Degrees play out more often because its catchy songs like “I’ve Been Thinking Of You” and “Mrs. Jones” have held up extremely well.

The Queue is a young band with a firm grasp of how to translate its fascination with the original British Invasion into classic power pop. With two strong vocalist-guitarists in Sean Michael Mulligan and James Marshall Duich, The Queue was able to create some impressive harmonies, especially when bassist Mike Schiff joined in on the singing. Drummer Aaron Bouslog kept a steady beat while Duich frequently cut loose on guitar. The band had a very catchy single for sale titled “Turn It Up Turn It On.”

Judging from its MySpace page, I figured Minnesota youngsters, Matt Dodge & The Lobsters were primarily aiming for the tween girl demographic, ala The Jonas Brothers. Their set at The Abbey quickly blew away that misconception. This is a hard-hitting quartet, with a dynamic frontman in Dodge. The band played energetic songs from the Lobsters! CD it was giving away at the merchandise table, and closed with a Clash-like intensity on the politically-charged “Currency.”

The Shake-Ups got their start in San Diego before moving to Indianapolis, and have released four CDs along the way. Their latest, Warm Fuzzies, is full of delicate, well crafted pop tunes written by vocalist-guitarist Patrick O’Connor. The band was more energetic live, with O’Connor sharing lead singing duties with keyboards player-vocalist Bitsy Matatall on new songs like “Prom Night Disaster,” as well as older stuff like “Can’t Stop The Signal” and “Forget The Future.”

Pop Dollys is a new trio whose members are veterans of several local pop bands. Vocalist-bass player Mike Cohen continues to perform as part of The Abbeys, guitarist-vocalist Tony Kola played with The Desperate Club, and drummer Don Koss played in Contraband. Together, they pursue a punk/pop hybrid approach on songs such as “Like A Hurricane,” which Cohen explained was about hotel mogul Leona Helmsley, and the funny “My Girlfriend’s Drunk Again.” Cohen belted out clever lyrics while Kola and Koss blazed away behind him. Fittingly, Pop Dollys closed with a faithful take on The Buzzcocks classic, “Harmony In My Head.”

Due to time constraints, I wasn’t able to stay for The Abbeys or Cyclesomething last Saturday afternoon. I’m hoping to make it out to a few more IPO showcases this weekend, and post more reviews.