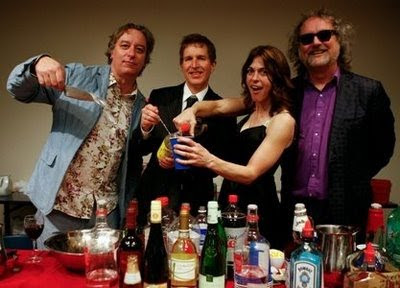 Let’s Play Two! “Cubs 2010” is a catchy new song from The Baseball Project that’s been getting a lot of airplay on WXRT in Chicago. It may have been composed specifically for the station, according to some rumors. The Baseball Project is comprised of Scott McCaughey, who formed Young Fresh Fellows and has toured with R.E.M.; Peter Buck of R.E.M., Steve Wynn of The Dream Syndicate; and Linda Pitmon of Golden Smog. In addition to their impressive musical resumes, they share a love of America’s favorite pass-time. The Baseball Project released Frozen Ropes And Dying Quails, an entire CD of songs about the sport (often with explicit lyrics) in 2008.

“Cubs 2010,” part of the band’s Broadside Ballads, has echoes of The Dream Syndicate as well as R.E.M., but also exudes the cheery outlook of a Christmas carol. The clever lyrics wish for one big present in the form of the first Cubs World Championship since 1908, and include references to current players like Carlos Marmol and Alfonso Soriano, as well as the hallowed favorites Ron Santo and Ernie Banks. The song is available for a free download at the ESPN website.

Those of us who were disappointed to find indie rock band The Handcuffs missing from the 2010 International Pop Overthrow - Chicago roster can take heart. The group, led by drummer Brad Elvis and singer-guitarist Chloe F. Orwell, are part of a triple bill at The Abbey on the city’s northwest side this very evening. The Handcuffs have had their songs featured on Gossip Girl as well as other TV shows, and are busy recording their third CD. This might be their last live performance before the summer. A very young trio called The Blisters, which features Jeff Tweedy’s son Spencer on drums, kicks things off at 9PM. Note: This is not the same band as The Blissters, who have an IPO gig coming up later this month. The Handcuffs perform at 10PM, followed by them cowboy hat wearin’ headliners from Detroit, Goober And The Peas, at 11PM.

Blane Fonda, the offbeat Chicago band whose fun and adventurous Master Of Stars and Broken Arms EP was reviewed here under the Demo-Listen Derby #2 post in February, recently played a gig at SXSW, and will be celebrating its first year anniversary with a show at Beat Kitchen on April 23rd. Also on the bill are The Urbanites, celebrating the release of their new The Years CD; introspective indie rockers The Hudson Branch; and the electro rock trio, Antennas Up.

The Chicago Cultural Center, at 78 East Washington Street in downtown Chicago, is hosting the 2010 Creative Chicago Expo tomorrow, Saturday, April 10th, from 10AM until 4PM. The Expo aims to bring various art forms, including music, dance, theater, publishing, fashion and visual arts together for mutual support and networking. There will be 25 workshops, over 100 vendors, and more than 40 consultants on hand to help individuals and organizations pursue success in the arts. Media sponsors include New City, The Reader, Cityvida.com and Bronzecomm. Admission is free.

The CHIRP Record Fair takes place this Saturday and Sunday from 10AM to 5PM at the Chicago Journeymen Plumbers Hall, 1340 West Washington in Chicago. Now in its eighth year, the eclectic marketplace offers CDs, vinyl, publications, and posters for sale. The $7 admission also covers live performances.