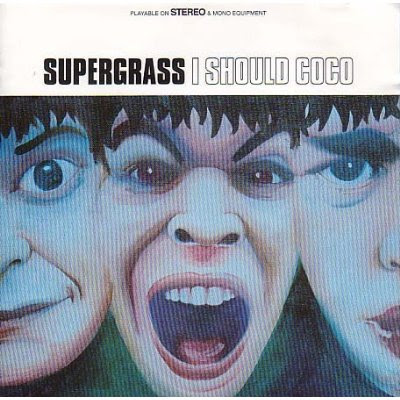 Supergrass, the British band that created a whole lot of irresistibly catchy and fun pop music over the past 16 years, is calling it quits. I can still remember when Michael Harris, then editor of the Illinois Entertainer, suggested I review I Should Coco, because “Supergrass is a Terry Flamm band if I’ve ever heard one.” He was right and I’ve been a fan since that rollicking debut. The 2008 release, Diamond Hoo Ha, was one of the band’s strongest. Supergrass will perform four more shows, unfortunately all in Europe, before pulling the plug. At least fans can console themselves with The Hot Rats, a new side project featuring Supergrass alums Gaz Coombes and Dan Goffey. I’ve been bugging current I.E. editor Steve Forstneger to send me a copy of their Turn Ons CD for the past two months, so hopefully, he'll come through.

A few days ago, I mentioned in a post about Puerto Muerto’s recently released Drumming For Pistols that the duo of vocalist-percussionist Christa Meyer and vocalist-guitarist Tim Kelley has broken up since the CD came out. Meyer will be playing with Mekons vocalist guitarist/radio host Jon Langford on May 2nd at the Chicago Cultural Center, at 78 E. Washington. Admission is free.

This Saturday, April 17th is Record Store Day, a fun new tradition, started in 2007, that’s held throughout the world. It’s an opportunity to enjoy an experience that has become increasingly rare these days: shopping for music in a physical setting rather than from a chair in front of your computer. Sort through vinyl records and CDs, page through international and local magazines, admire the posters on the walls, and even chat with an employee about whatever artist is playing on the overhead speaker.

Over 20 records stores in Chicago will be involved, including Permanent Records; Gramaphone Records; the Reckless Records locations in downtown, on Milwaukee Avenue, and on Broadway; Dusty Grooves America; Beverly Records, DEADWAX; Dave’s Records; Kstarke Records; Shake Rattle, & Read; Hard Boiled Records; and Record Breakers. There are a number of special edition vinyl releases that will be sold only on Record Store Day, so get out there and join the treasure hunt.