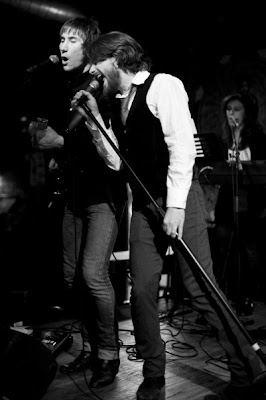 International Pop Overthrow continues today with an afternoon show kicking off at 1:30PM at The Abbey. The lineup features Hop On Pop; Leslie Hunt; Superfly Samurai; Detroit’s melodic rockers The Pounders; the glam rock of V Sparks; and the coed catchy pop of Otter Petter. Hollus, a band that expertly channels the vintage rock of The Faces and early Led Zeppelin, will be giving away copies of its brand new single, "Lucy Grey/Songs That You Love" at today’s show.

Later tonight, IPO moves to Red Line Tap on Glenwood Avenue for another showcase, beginning at 8:00PM. Ghostwriter, featuring former Catsplash member John Luckhaupt, is the first act, followed by The Pralines, with singer-songwriter Pamela Richardson. The Desperate Club, whose light, melodic sound has elements of Robin Hitchcock, takes the stage at 9:00, with Springfield’s power pop band The Oohs following directly afterward. The Sweeps, a guitar-driven trio, and Wild Wild Voices from Milwaukee come next, and Milwaukee’s psychedelic Elusive Parallelogram are tonight’s headliner.

IPO will be back at Red Line Tap tomorrow night with another impressive showcase.

I’m hoping to post a review of the bands I saw this weekend later here on this blog.