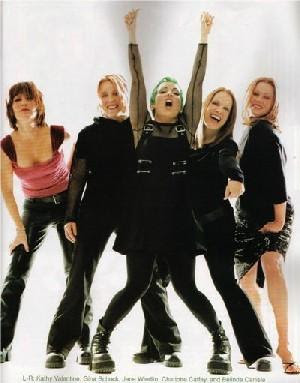 A buffet of items about the pop culture world.

NOTE: MY PREVIEW OF TONIGHT’S INTERNATIONAL POP OVERTHROW IS INCLUDED IN THIS COLUMN.

First there was the sobering news that Supergrass was embarking on a farewell tour, and now comes word that The Go-Go’s will be calling it quits after their next tour. Neither band will visit Chicago. The Go-Go’s released an impressive comeback CD with God Bless The Go-Go’s in 2004, but never regained their initial popularity. I saw them a few years back at The House Of Blues in Chicago, where they thrilled a packed house with their dynamic performance, Some of the members will no doubt continue on, but this is still a major loss to the power pop scene.

The Goldstars, who released some truly fun pop CDs and did a stellar job of opening for The Hoodoo Gurus a few years back, are also leaving us. They have a farewell show scheduled at The Bottom Lounge in Chicago on June 12th.

Ralph Covert of The Bad Examples and Ralph’s World fame has a solo gig coming up at Two Brothers Tap in Warrenville, IL on May 12th. Covert describes the gig as “an evening for grown-ups” and promises to play some new material, as well as take audience requests for old favorites.

Give ‘em an award, and now they think they’ve got what it takes to rule Facebook. The Hollies have an official page where fans can learn about upcoming radio interviews, watch videos of live performances, order the band’s Midas Touch CD, and enter contests.

Singer-songwriter Ellen Rosner will be part of a triple bill with Scott Free and Kathryn Trapper this Sunday night as Cake Chicago returns to Red Line Tap for its monthly showcase. Hosted by singer-songwriter Ripley Caine, Cake Chicago aims to blend “queer artistry into the general public through live music and more.” The show starts at 9:00PM.

Singer-guitarist Phil Angotti, a veteran of Chicago’s power pop scene on his own as well as with other musicians, has a gig with Casey McDonough, Carolyn Engelmann, and Tommi Zender this Sunday night at Simon’s Tavern on north Clark Street in Chicago. The band will play two sets, starting at 9:00PM.

The DVD’s the thing. If you missed former Doctor Who star David Tennant performing the title role in that recent PBS Greatest Performances production of Hamlet, or if you liked it so much you want a copy to keep throughout all time, you’ll be happy to know BBC America will release it on DVD and Blu Ray on May 4th.

The Bangles come to Chicago tomorrow night for the AIDS Foundation of Chicago’s back-tie Spring Gala. The event is being held from 6:00PM to midnight at the Hilton Chicago on South Michigan Avenue. Tickets are $500.00.

International Pop Overthrow wraps up its 2010 tour of Chicago this weekend with a showcase tonight at Bird’s Nest on Southport, and a pair of showcases tomorrow at The Abbey on Elston. IPO founder David Bash has a talent for spotting up-and-coming power pop and indie rock talent, so I highly recommend checking out one of these events. All acts are from Chicago unless otherwise noted.

Toronto singer-songwriter Blair Packham is the opening act for tonight’s lineup at Bird’s Nest. His melodic tales include “One Hit Wonder,” one of the few tributes to Bobby “Boris” Pickett you’re likely to hear. A former member of The Jitters, his latest CD is Could’ve Been King. Former St. Louis resident Doug Bobenhouse was the driving force behind The Sun Sawed In 1/2 and now he’s in Chicago leading The Effingways. The band creates spare but appealing pop tunes like “Memories Of Doubt” and is working on its first CD.

The Elements Of Style may sing “Rock & Roll Is Dead,” but it’s actually alive and well in this quartet’s hands. Guitar-driven songs like “In The City” and “When I Close My Eyes” have a classy sound similar to The Changes, but with a rougher edge. The Help Desk calls its music “diversapop” because of the various musical styles it incorporates, but there’s also an off kilter sense of humor at work here, as evidenced by song titles like “Ghost Tattoo” and “The Jellyfish Song.” “My Favorite Wrapper” is straight up pop, while “She Said” has more of a jam band feel.

Minneapolis club scene veterans Tim Casey & The Martyrs were scheduled for 10:00PM tonight, but I’m seeing Facebook posts from David Bash and Aaron Fox & The Reliables that Fox and his band are now playing in that slot. Here’s what I had to say about Aaron Fox & The Reliables when they performed at The Abbey last Thursday: The band’s melodic approach to rock is most impressive on the energetic “Get Down,” which has a bit of a Gin Blossoms feel to it. Other tracks, like the chiming “Over Again,” effectively mix acoustic and electric guitars in lighter arrangements.

Led by 92 Degrees bassist-vocalist Mike Galassini and his wife, singer Marianne Shimkus, The Valley Downs create melodic pop tunes that at times evoke The Bangles. The band released an impressive EP in Behemoth, and recorded a video for the fetching new tune, “Play For You.”

Tonight’s headliners The Webstirs have a tradition of creating catchy power pop that extends to its latest CD, So Long. The title track is a prime example of the band’s approach, with strong vocals, energetic instrumentation and great hooks.

I'm hoping to catch some of this weekend's IPO performances and post reviews next week.