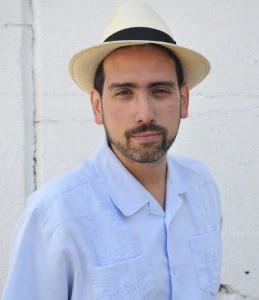 I can’t claim to have known Carlos Hernandez Gomez, but those who did paint quite an affectionate portrait of him. Gomez, a political reporter for WBEZ radio as well as for the local television station CLTV in Chicago, passed away from cancer at age 36 this past January. Chicago Sun-Times columnist Carol Marin called him, “streetwise and smart, punky yet sweet.”

He also made numerous friends among musicians in the city, and loved hanging out at Fest For Beatles Fans when it came to the Hyatt Regency in Rosemont each August. A post on the Facebook page for Fest For Beatles Fans notes that he was one of the people who sang “under the stairs.” This is an area in the hotel’s lobby where anyone at The Fest can join in on the communal spirit of singing Beatle songs. Terri Hemmert, the host of the weekly Breakfast With The Beatles show on WXRT, and a longtime emcee at The Fest, recalled Gomez as a friend, in a recent blog post on the station’s website.

On Thursday, April 8th, there will be a special Concert For Carlos, with a multi-media slide show, live bands, and an auction featuring donations from Pete Townshend, Brian Wilson, Ray Davies, and other well-known musicians. Performers will include The Gear; Eric Howell; The Beatle Brothers; Phil Angotti; and special guest Brad Elvis. The show starts at 7PM.

It will take place at Fitzgerald’s Night Club, at 6615 Roosevelt Road, in Berwyn. Tickets are $25 in advance, $30 at the door. All proceeds go to Living Water International Haiti, a charity Gomez was actively involved with up until his death. There is also an online auction. For more information, see fitzgeraldsnightclub.com and www.water.cc/carlos