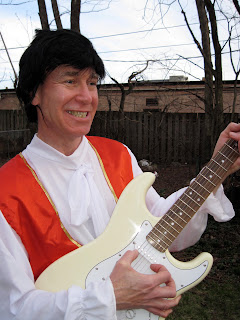 Don McFunnamy has an axe to grind. Photo from the artist’s pathetic MySpace page.

NOTE: THESE 'REVIEWS' ORIGINALLY APPEARED IN A SPECIAL APRIL FOOLS ISSUE OF THE ILLINOIS ENTERTAINER.

While many rock artists boast of their sexual conquests, poor Don McFunnamy is still trying to make it to first base. He’s the only musician I've ever seen who doesn’t have a single friend on his MySpace page. His debut CD, Looking For A Clue, finds the Chicago-based singer-guitarist trying to find love on a series of rock songs and ballads. It’s a revealing work - - probably more revealing than McFunnamy intended.

The sunny melodies of “Still Waiting For Your Facebook Confirmation” and “Hey, This Isn’t Your Phone Number” can’t disguise the bitterness of a guy perpetually viewed as a geek. “Pretty Brunette Sketching Picasso At The Art Museum” and “Hot Blond Sitting In Front Of Me On The Bus” are just two of the recipients of McFunnamy’s unwanted attention. Still, he expresses disdain for family members and friends who try to fix him up, as evidenced by songs like “She May Be Your Cousin, But She’s Not My Type” and the abrasive, “Mom, Stop!”

Riot grrrl band Apocalypse Meow offers an interesting twist on its latest CD, Uncovered And Unashamed, by covering some of the sappiest songs recorded by female artists in the rock era. Vocalist-guitarist Liette Strafe doesn’t change any of the lyrics, she just performs them with such vicious sarcasm that the original sentiment is decimated. When she belts out Tammy Wynette’s “Stand By Your Man,” she sounds more like she’s standing behind him, making lewd gestures.

Sheena Easton gets raked over the coals for her saccharin hit “Morning Train,” and Strafe seethes with anger as she sings, “How it makes me quiver, how it makes me smile” on The Bells’ “Stay Awhile.” Apocalypse Meow also scorches Little Peggy March’s “I Will Follow Him” but the CD’s most scathing attack comes on Shania Twain’s “For The Love Of Him.”