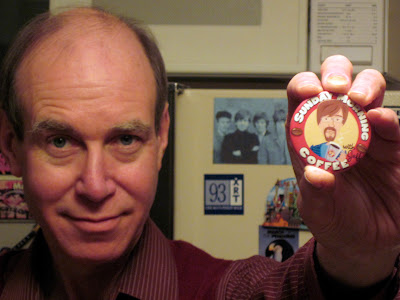 I’ve posted some new information about upcoming performances in the Elevated Observations column, but otherwise, today’s post is all about me.

My wife Pam and I are creating a series of short videos called Manchester Gallery. The title venue is really my slightly-larger-than-a-closet media room, where I keep an extensive, and in some cases, unusual collection of rock and roll memorabilia. Posters, 45’s and LPs, autographed tour books, guitar picks, magazines, trading cards, bubblegum wrappers, etc. Nothing that’s worth much money, but the idea of Manchester Gallery is to present each item in an interesting, and hopefully, amusing manner. In the videos, I take on the persona of Terrence, the Gallery’s snobbish curator, who insists that every one of the artifacts he’s presenting is priceless.

Our first Manchester Gallery is about a Graham Nash puppet I had custom made by an artist who does soft sculptures. Terrence offers an entirely fictional account of its origins. The video can be seen on Part Two of the January 10th installment of Sunday Morning Coffee With Jeff, an offbeat Internet show Pam and I have been enjoying for some time now.

Host Jeff Kelley assembles an assortment of clips from commercials, TV shows, and hilariously bad B-movies, that along with his own clever observations, explore a particular theme. A regular segment called On The Road With Willy depicts the affable Willy on his way to the latest gig by his favorite local rock band, Goin’ South. The January 10th Sunday Morning Coffee With Jeff focused on the United States Navy with a zany outtake from the McHale’s Navy TV series, Popeye and Donald Duck cartoons, an official U.S. Navy newsreel, and clips from Abbott & Costello In The Navy and Hellcats Of The Navy with Ronald Reagan.

Kelley just kicked off his second season of Sunday Morning Coffee With Jeff, and in addition to a snazzy new set designed with help from commercial artist Dave Metzger and moving from a weekly to bi-weekly format, he wants to include more original material. That’s where Pam and I came in. Our second Manchester Gallery, which casts a spotlight on my various action figures, is slated for the January 24th edition, and we’re planning on doing more. Kelley is open to suggestions. Anyone interested in participating in Sunday Morning Coffee With Jeff can contact Kelley at his website.

Thanks for the plug! And Manchester Gallery for this Sundays show 1-24-10 is fantastic!