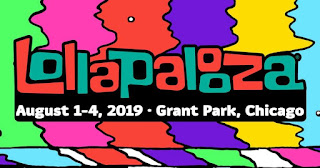 Lollapalooza runs tomorrow through Sunday, bringing Sharon Van Etten; Ariana Grande; Tame Impala, Janelle Monae; Gary Clark Jr.; The Strokes; Kacey Musgraves; Death Cab For Cutie; Fitz And The Tantrums, about 170 other acts, and thousands of fans to Grant Park. This week’s edition of The Reader (out tomorrow) will be devoted to the annual festival, and I suspect Innerview magazine has published a special issue although I’ve haven’t seen it yet. Expect to find plenty of coverage in Chicago’s daily papers as well. WXRT radio personality and superb interviewer Marty Lennartz will be broadcasting live from Lollapalooza throughout its run, offering updates and chatting with some of the performers.

According to a recent email from Rock Art Show, the Zia Gallery in Winnetka is having a free Ringo Starr Fine Art Show to coincide with the Beatle drummer’s pair of shows with his All-Star Band at Ravinia this Saturday and Sunday. The gallery will be selling signed, limited edition art work by Starr on August 3 and 4, with all proceeds going to the Lotus Foundation. The Zia Gallery is located at 44 Green Bay Road in Winnetka.

Feel lucky, punks? The Second Disc website recently reported that Rhino Records will release a 40th anniversary boxed set of The Ramones’ Alive album in September. It will be available in four-CD and 2-LP versions. This follows an earlier post (every music fan should actively follow The Second Disc) about Dead Man’s Pop, an upcoming four-CD boxed set of previously unreleased material from The Replacements that’s also due out in September.
Posted by Terry Flamm at 8:02 PM