Louder Than Words: Another Hit For The Museum Of Broadcast Communications 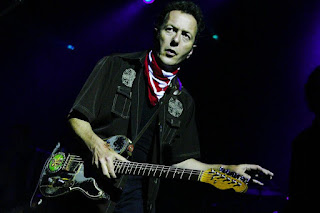 One week ago today, part of my birthday activities was a visit to the Louder Than Words: Rock, Power and Politics exhibit at the Museum Of Broadcast Communications. Originally developed by The Rock And Roll Hall Of Fame, it’s a fascinating collection of archival footage, rock videos, documents, clothing, and musical instruments that illustrates how often political themes—liberal and conservative—have surfaced in rock and roll. The Clash, Green Day, U2, Crosby, Stills, Nash and Young, and Dead Kennedys are some of the artists featured.

Among the 175 artifacts are handwritten lyrics to songs by Bob Dylan, Neil Young, James Brown, and others. Being just inches away from the battered Fender Telecaster Joe Strummer played at countless gigs was worth the price of admission alone. According to a recent article by Steve Johnson in the Chicago Tribune, the Louder Than Words exhibit will be followed by a very promising new one in October titled Stay Tuned: Rock On TV.

The Museum also scored a major hit with its Saturday Night Live: The Experience exhibit about a year ago. In his article, Johnson noted that long-time journalist Susy Schultz was recently named as the Museum Of Broadcast Communication’s executive director. Congratulations, Susy. Keep those fun and provocative pop culture exhibits coming. Louder Than Words: Rock, Power and Politics runs through the end of August. The Museum Of Broadcast Communications is located in downtown Chicago at 360 N. State Street.
Posted by Terry Flamm at 9:04 PM