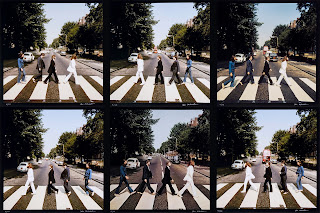 Welcome to everyone who’s in town for The Fest For Beatles Fans - Chicago running this weekend at the Hyatt Regency O’Hare in Rosemont. If you’re staying at the Hyatt or one of the other nearby hotels and are wondering if you could make a quick visit to Chicago, the CTA Blue Line stop is a short walk away. It can get you downtown in about 40 minutes. For a preview of this year’s Fest For Beatles Fans event, check out August 5 post.

A recent post on The Second Disc website has all the details about the various versions of Abbey Road Apple will be releasing in honor of the 50th anniversary of the The Beatles’ finale. In addition to a CD/Blu Ray/hard cover book boxed set, a three LP vinyl set, a two CD set, and a single CD release; Apple is also putting out an EP version of George Harrison’s “Something.”

The Jay O’Rourke Band is having a CD Release Party Party for Cover Tracks tonight at SPACE in Evanston. The album features renditions of classic rock and blues songs. It’s a safe bet the band will also be selling copies of its earlier 2019 release Sumpthin Good. The Dick Dale influenced instrumental act Spies Who Surf will be the opening act.

How Do You Love?, the long-awaited second album from the Los Angeles punk band The Regrettes, was released today. After downloading it and giving the 15 tracks a quick listen (my CD is on its way from Amazon), I can already tell it’s another successful blend of vintage punk and 1960s girl band sound, with clever lyrics that bite and amuse.

The first batch of special guests for The Chicago TARDIS convention being held November 29 – December 1 in Lombard has been announced. It includes Paul McGann, who played The Doctor in an American TV movie version of the U.K. sci-fi series, and had a pivotal cameo the Doctor Who 50th Anniversary short clips. Tosin Cole, Greg Austin, Vivian Oparah, and Sophie Hopkins will also be there, along with other Doctor Who related guests to be announced later.

No Holiday, The Muffs’ first album in five years, will be coming out on October 18 via Omnivore Recordings. The 18 new tracks will be available on CD or on two vinyl LPs, with the fourth side being laser-etched. Band member Kim Shattuck is also part of the newly formed trio The Coolies (with Palmyra Delran and Melanie Vammen), who just released their debut EP, Uh Oh, It’s. . . The Coolies.

Stray Cats bassist Lee Rocker has a solo album titled The Low Road coming out this Friday. Earlier this year, The Stray Cats released 40, their first album in 40 years.

Back when I did my August, Rock She Must post on July 30, I knew I would miss some worthy events, and here’s a prime example. This year’s Backlot Bash in Skokie kicks off on Friday, August 23 with the highly potent double bill of Material Reissue and The Smithereens with Marshall Crenshaw. In previous shows, Material Reissue has opened for Matthew Sweet and The Posies, and here they are with another great power pop act. Other must-see acts at the Backlot Bash include The Imperial Sound, Tributosaurus becomes The Rolling Stones; and the iconic soul band War.

Ex Norwegian, the Miami-based trio whose albums have consistently met with extensive praise here on Broken Hearted Toy, have a 15-track vinyl LP titled Something Unreal: The Best Of Ex Norwegian coming out on September 20.

The Alarm (“The Stand”, “Marching On”) will share a bill with Modern English (“I’ll Stop The World And Melt With You”) on August 16 and 17 at House Of Blues in downtown Chicago.

Jazzin’ At The Shedd continues its summertime run tomorrow night at the Shedd Aquarium. The night-time event is being held every Wednesday from 5:00 to 10:00 p.m. through August 28. The Shedd promises jazz, drinks, fireworks, and “the chance to look nature in the eye.”
Posted by Terry Flamm at 8:56 PM