Return Of The Killer Rabbit And Other Nonsense 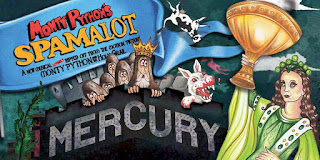 Just as the official celebration for the 50th anniversary of the Monty Python’s Flying Circus TV show is heating up, we’ve got some Python-related fun starting this week in Chicago. Spamalot opens this Friday, August 30 at the Mercury Theater and runs through November 3. The production is being directed by L. Walter Stearns; Eugene Dizon is the Musical Director. Performances will be at 8:00 p.m. Wednesday through Saturday each week, with an additional show at 3:00 p.m. on Saturday, and a 3:00 p.m. show on Sunday.

My wife Pam and I loved Spamalot when it first came to Chicago around 2004, with its all-star cast of Tim Curry, Hank Azaria, and David Hyde Pierce. Eric Idle had created a musical “lovingly ripped off from the motion picture Monty Python And The Holy Grail” by setting clever lyrics to music composed by himself and John Du Prez. We caught a second production downtown a few years later with a different cast and enjoyed the very silly Knights of the Round Table all over again.

As to whether a local company can do this hilarious musical justice, Theatre Nebula proved it’s possible with their production at Cutting Hall in Palatine in 2014. We’re looking forward to seeing how Mercury Theater goes about chopping off limbs, searching for shrubbery, and saying “Ni!”while wearing extra tall knight costumes. The Mercury Theater is located at 3745 N. Southport.
Posted by Terry Flamm at 8:08 PM