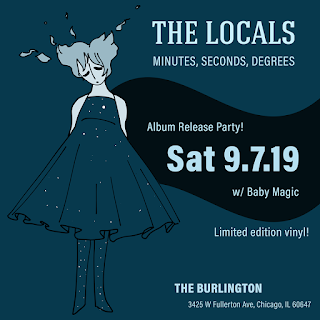 Veteran Chicago music scene trio The Locals  have an album release party for its latest effort Minutes, Seconds, Degrees coming up at The Burlington on Saturday, September 7. A limited-edition vinyl version will be available at the show, and a video for the catchy and aggressive “Eyes Wide Open” can now be viewed on the band’s website. Baby Magic, Doomerang, and Deep Fake will also perform that night. The Burlington is located at 3425 W. Fullerton in the Lincoln Park area.

Lead vocalist-guitarist Yvonne Doll is also an accomplished solo artist, and she’s well matched in The Locals with bassist Joe Bates and drummer Aaron Coleman. When I reviewed the band’s Salt EP for the Illinois Entertainer somewhere around 2009, I compared the hard-hitting, melodic song “Sound It Out” to Melissa Etheridge, but with more of a Midwestern power pop feel. The lineup has changed over the years but the approach sounds as focused as ever.

EXPO ’76 will be reaching into its bottomless bag of cover versions this Friday night at Hey Nonny, the classy Arlington Heights venue that’s previously shown impeccable taste by booking The Imperial Sound and The Flat Five. The Bad Examples will be there on September 12. Hey Nonny is looking more and more like an essential rock entertainment venue for the northwest suburbs.

The Phil Angotti Band, The Hushdrops, and The Plastic Macs will share a triple bill tomorrow night at Martyrs’ on Lincoln Avenue. Angotti is fresh from some impressive tribute shows on the Apple Jam Stage at the Fest For Beatles Fans – Chicago. The Hushdrops are led by vocalist-guitarist John San Juan, who also did Chicago proud on the Apple Jam Stage. The music starts at 8:00 p.m.
Posted by Terry Flamm at 9:00 PM