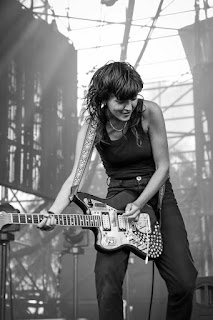 Critically acclaimed Aussie singer-guitarist and free spirit Courtney Barnett kicks off this year’s Taste Of Chicago concert series tomorrow night on the Petrillo Music Shell. Barnett will likely be showcasing her latest release Tell Me How You Really Feel, which features offbeat but catchy, guitar-based tracks like “City Looks Pretty,” “Nameless, Faceless,” and “Crippling Self-Doubt And A General Lack Of Confidence.” It’s available in various formats via her own label Milk! Records. Sunflower Bean, an indie rock band that’s garnering attention with its Twentytwo In Blue album, will be her opening act. Taste of Chicago wraps up Sunday night an impressive double bill of rhythm and blues stars India.Arie and Meshell Ndegoecello.

The Long Grove Arts and Music Council has four events scheduled for the suburb’s 14th season of free Sunday afternoon outdoor concerts on Towner Green. Corky Siegel and Will Tilson will perform on July 14; followed by Creole Stomp on August 4; Sons Of The Never Wrong on August 11; and The Don Sternberg Quartet on August 18. All shows start at 4:00 p.m.
Posted by Terry Flamm at 9:05 PM