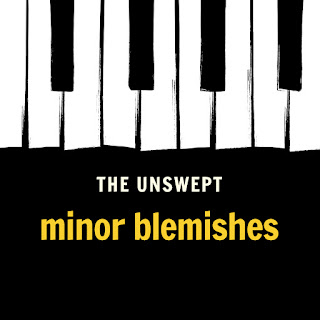 Leave it to those clever transplanted Brits of The Unswept to title their third full-length effort Minor Blemishes; as though these dozen tracks are somewhat inconvenient or embarrassing. Rather, the album brims with offbeat charm, chiming guitars, and infectious melodies. Founding members Charlie and Ryan O’Brien have lived in Chicago for a few years now but their power pop songs are still influenced by the 1960s British Invasion.

Much of Minor Blemishes concerns pining for or losing relationships, although the opening track “Sunshining” celebrates the simple pleasures (“paperbacks and cups of tea”) of sharing your life with the right person. Bassist-vocalist Liz O’Brien—I’m not how or if all the members are actually related—joins Charlie on the rollicking breakup song “I’m Still Here,” and provides spirited back-up singing throughout the album. Liz, Charlie, and Ryan combine their vocals on the Bob Dylan flavored “You Ain’t On My Mind,” and they nail the off-beat satire of The Bevis Frond’s “He’d Be A Diamond.”

“The Boy Who Wakes You Up” is simultaneously innocent and creepy, while “She Just Knows It’s Over” depicts a wife leaving her husband and kids because she’s bored with that lifestyle. “Brown Line” is another breakup song, as a couple decides to call it quits while commuting on the CTA. On a different note, the very Beatles-like “Fake It” deals with how difficult it can be just trying to survive the average workday.
Posted by Terry Flamm at 5:52 PM