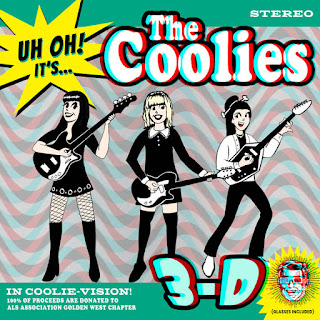 Welcome to everyone who’s in town for the Pitchfork Music Festival taking place in Union Park this weekend. Mavis Staples, Haim, Low, The Isley Brothers, Belle and Sebastian, Stereolab, and Neneh Cherry are among the acts scheduled. The Chicago Reader once again has a colorful Pitchfork cover created by illustrator Jason Wyatt Frederick (I’m among the people who collect them), and you might still be able to pick up a copy of the Chicago Innerview Know Before The Show issue devoted to Pitchfork. You’ll also find coverage in this week’s issue of Redeye and the daily papers.

The Coolies, a new garage rock trio made up of Kim Shattuck, Melanie Varmmen, and Palmyra Delran, released their six-song Uh Oh! It’s . . . The Coolies debut in digital format today and a 10-inch clear emerald vinyl version is available on the band’s Bandcamp page.

Abbey Road Studios had a recent post on Instagram showing the surviving members of The Quarrymen recording music as part of an upcoming documentary titled Pre Fab. The film will cover the origins of the skiffle band, which at one time included John Lennon among its members.

Neo, the Clark Street venue that played a major role in bringing new wave to Chicago back in 1979, is celebrating that heritage by having a reunion tomorrow night at Metro. DJs Suzanne Shelton, Glenn Russell, Carrie Monster, Scary Lady Sarah, and Jeff Moyer will provide the music. Admission is $21; a portion of the proceeds will go to benefit Darkest Before Dawn, a non-profit organization dedicated to providing support for industry workers.

A new season of Jerry Seinfeld’s Comedians In Cars Getting Coffee starts tonight on Netflix.

Rod Hamdallah, The Dyes, and Amazing Heeby Jeebies will share a triple bill at FitzGerald’s in Berwyn on July 30.

It's hard to tell if Chicago-based Mercury Theater knew Monty Python would be celebrating its 50 Birthday in 2019 and planned accordingly; or if the upcoming production of Spamalot is just a coincidence. At any rate, it’s a perfect fit for the occasion. The “Lovingly ripped off from the classic film comedy Monty Python and the Holy Grail” show will run at Mercury Theater (3745 N. Southport) from August 28 to November 3.

You won’t find a single Gumby in Spamalot, but if you fancy dressing up like the iconic Monty Python character, there’s an official Monty Python Dress Like A Gumby event taking place on October 5. If you follow Monty Python on Instagram, you might have seen the illustrated instructions on how to assemble the costume.

The Bob Dylan: Electric exhibit has been extended at the American Writers Museum in downtown Chicago.

The Black Harvest Film Festival continues its 2019 run at the Gene Siskel Film Center through July 22.

Kokandy Productions’s production of Head Over Heels, the Broadway musical based on songs by The Go-Go’s, continues through August 25 at Theatre Wit on Belmont Avenue.

Pulling ducks out of the water, got the highest score. The Chicago Ducky Derby charity event to benefit Special Olympics Illinois will take place at 401 N. Michigan Avenue on August 19. Chicago Cubs players Kyle Hendricks and Willson Contreras are this year’s Ambassadors. Anyone interested in a adopting a rubber ducky to help the cause can find the details at the Chicago Ducky Derby website.
Posted by Terry Flamm at 9:33 PM