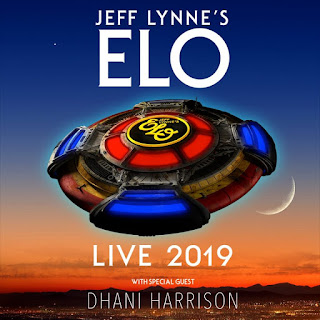 I’m sure David Bash took a moment to raise a toast in honor of my birthday at some point yesterday before getting back to the serious business of planning International Pop Overthrow - Los Angeles. The power pop festival opens with a Big Stir Records six-band showcase tonight at the Fais Do Do venue. Los Angeles is the birthplace of IPO, and this year’s celebration runs through next Sunday, August 4 at Fais Do Do, Molly Malone’s, Silverlake Lounge, and Skinny’s Lounge. Performers include Lannie Flowers Band; The Armoires; Sparkle*jets UK; The Tearaways; Maple Mars; Bill Lloyd; The Jeremy Band; and The Cherry Bluestorms.

This year’s IPO - Los Angeles is being dedicated to the memory of John Ferriter, who recently passed away. Ferriter managed several bands, including The Tearaways and The Beach Boys.

The Jeff Lynne’s ELO with Special Guest Dhani Harrison concert takes place tomorrow night at the United Center. Lynne is a founding member of Electric Light Orchestra (along with Roy Wood, Richard Tandy, and Bev Bevan) and was a member of The Traveling Wilburys. Dhani is the son of George Harrison, who in addition to being a Beatle and great solo artist, was one of Lynne’s fellow Traveling Willburys.

Tickets went on sale today for Robbie Fulks at City Winery Chicago on October 18; Kelly Hogan, Scott Ligon, and Nora O’Connor at Hideout on September 20; Gordon Lightfoot at Copernicus Center on September 27; Rasputina and Charming Disaster at Subterranean on October 26; and Tegan and Sara Northwestern University on October 15.

Chicago-based Joy Division tribute band The Unknown Pleasures will mark the 40th anniversary of the release of Joy Division’s Unknown Pleasures album with a show at Martyrs’s on Lincoln Avenue tomorrow night. The Handcuffs, who are wrapping up their latest album in the studio, will also perform that night, along with Quiet!. Showtime is 8:00 p.m.

Sunshine Boys, whose 2018 Blue Music debut was an absolute masterpiece,will return to The Wine Goddess venue in Evanston next Saturday, August 3. According to a post on Facebook, the trio will be performing all the songs from a brand new release at this gig.

The New Duncan Imperials have a gig tomorrow night at FitzGerald’s in Berwyn. The trio can be heard in all its off-kilter glory on the recently released Hunny Bunny five-song EP. Thrift Store Halo, whose Consolation Prize Fighter EP is currently rocking the independent music charts, will be the opening act.

English gentlemen on the way. Bryan Ferry comes to town for a gig at Chicago Theatre this Thursday, August 1. John Mayall performs at City Winery Chicago on that same night, and
Moody Blues vocalist-guitarist Justin Hayward will perform at the Athenaeum Theatre on Southport on August 9.

David Crosby: Remember My Name, the new A.J. Eaton-directed, Cameron Crowe-produced and narrated documentary about the Byrds/CSNY/solo musician, opened in selected theaters today. It drew high praise from Chicago Sun-Times movie critic Richard Roeper and Chicago Tribune movie critic Katie Walsh. For a number of reasons both of them mentioned, it seems well worth seeing.

Earlier this week, Chicago Tribune theater critic Kerry Reid gave three and a half stars to Head Over Heels, the new musical based on songs by The Go-Go’s. It ran on Broadway, and is now being staged by Kokandy Productions at Theater Wit on Belmont Avenue.

Brand new Chicago-based goth/garage rock trio Aweful has a record release party coming up at The Empty Bottle next Thursday, August 1 for its debut EP. Band members Traci Trouble, Lucy Dekay, and Izzy Price are veterans of the local alt rock scene, and their first single “Me Me Me” serves as an engaging calling card. Touched By Ghoul. Boybrain, and DJ Andy Ryan will also be featured at The Empty Bottle that night.

Santana and The Doobie Brothers will be performing at Hollywood Casino next Sunday. August 4.

New City magazine just put out its annual Music 45 - Who Keeps Chicago In Tune issue. Each time New City chooses the most influential individuals in local music, a little voice inside me says, “I’ll save you the suspense, you’re not included.” And of course, I’m not. This year’s top honor went to David Chavez and Carlos Cuauhtemoc Tortelero of the Department Of Cultural Affairs and Special Events (DCASE). Other honorees included Kate Gumbleton, Executive Director Of the Hyde Park Jazz Festival; Bettina Richards, owner of theThrill Jockey indie label; Ron Onesti of The Arcada Theater in St. Charles; and James VanOsdol, host of Demo 312 on 101WKQX.
Posted by Terry Flamm at 10:04 PM