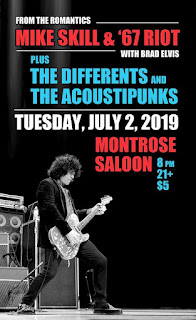 Wish me luck. I’ll be pitching my two my rock and roll novels (and possibly a Middle Grade fantasy) to literary agents at the Writing Workshop Of Chicago tomorrow at the Congress Plaza Hotel on south Michigan Avenue. I’ve gone to this event the past two years and found it a very rewarding experience. Aspiring writers tend to think of literary agents as cold and unsympathetic, but engaging with them in a friendly, informative face-to-face meeting certainly changes that outlook.

Pete Townshend has written a novel. It’s called The Age Of Anxiety and is coming out on November 19.

Mike Skill and ’67 RiOT with Brad Elvis; The Differents; and Acoustipunks will share a triple this coming Tuesday at Montrose Saloon on Chicago’s north side. Skill and Brad Elvis are well known as members of The Romantics, and Brad Elvis is also a founding member of the Chicago-based indie rock band The Handcuffs. Show time is 8:00 p.m.

Tickets went on sale today for Black Flag at Reggies’ Rock Club on August 25; the Dave Brubeck Tribute Project at SPACE on August 28; Shemekia Copeland at SPACE on October 11; Elvis Costello and The Imposters at Chicago Theatre on November 22; Marshall Crenshaw at SPACE on December 12; Morrissey and Interpol at Ravinia on September 14; and New Pornographers and Lady Lamb at The Vic on October 2. These listings, and several others, can be found on the Early Warnings page of this week’s Reader.

Megan McDonough has a gig coming up next Saturday, July 6; at SPACE in Evanston.

Former Hollies lead vocalist Allan Clarke is due to release the single “Journey Of Regret” on July 12. It’s the first taste of Clarke’s new album Resurgence, which is coming out on September 20. It will be Clarke’s eighth solo effort, but the first in almost 30 years.

The Petty Kings will be performing Tom Petty songs on July 7 at the Mount Prospect Lions Club Festival and on July 12 at the 210 Live venue in Highwood.

The Kokandy Productions presentation of Head Over Heels opens on Monday, July 1 and runs through August 25 at Theatre Wit on Belmont Avenue. The gay-centric and anachronistic musical is based on songs by The Go-Go’s.

Former Doctor Who star David Tennant and current Doctor Who star Jodie Whittaker are among the English stage and film performers taking part in the BBC Children In Need: Got It Covered CD project.  Each of them will record a cover version of a hit song. Helena Bonham Carter and Jim Broadbent will also be contributing. There will also be a 60-minute programme showing the rehearsals and recordings.

Matt Smith of Doctor Who and The Crown fame and Keira Knightley of thousands of movies fame will be co-starring in a political thriller titled Official Secrets.

Chicago-based indie/roots rock label Bloodshot Records will be celebrating its 30th Anniversary at the Square Roots Festival in the Lincoln Square area on July 13. Murder By Death, The Mekons, and The Vandoliers will take part in a tribute to the late Andre Williams. The Bloodshot All-Stars Band and other special guests will also be on hand.
Posted by Terry Flamm at 9:34 PM