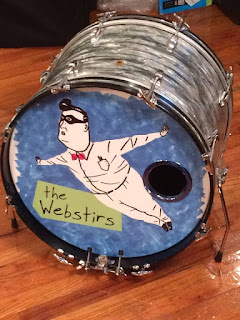 A hearty welcome to The Rolling Stones, who are in town for a concert tonight at Soldier Field and another one there on Tuesday. In between those shows, they’ll be rehearsing on my gazebo.

Today is Pam Appreciation Day, my annual celebration of my wonderful wife Pam and all the things she does to make our life together so happy and fun. She set up this blog for me just about 10 years ago and Broken Hearted Toy could not have existed without her help. Feel free to use this occasion to celebrate your own significant other and take some time to appreciate what you have together.

There’s an amazing triple bill coming up at Montrose Saloon tomorrow night, featuring The Webstirs, The Dave Sebastian Band, and Magnaphonic. I’ve seen The Webstirs live and have thoroughly enjoyed their clever and irresistibly catchy albums. Mike Galassini and Marianne Galassini have created masterful power pop as Magnaphonic and The Valley Downs, so it’s great to see them back on the local club scene. Dave Sebastian was a founding member of the Chicago power pop band The Raine, which reunited and backed Cliff Johnson from Off Broadway in recent years. The show starts at 9:00 p.m.

This coming Monday night at Montrose Saloon, former Green On Red lead vocalist turned author/solo recording artist Dan Stuart pays an unexpected visit to Chicago. He completed an ambitious novel/album trilogy centered on the character Marlowe Billings in 2018, and is known for his extensive travels. His gig at Montrose Saloon should be intriguing, to say the least.

Tickets went on sale today for Catfish and The Bottlemen at Aragon Ballroom on October 5; Heartsfield at FitzGerald’s on August 31; Rhett Miller at City Winery Chicago on September 16; and the Phil Ochs Song Night at The Old Town School Of Folk Music on September 15. Sleater-Kinney have added a second show at The Riviera Theatre. They’ll now be there on October 18 and 19.

Some websites, such as Steve Hoffman Music Forums and Elevated Observations, are reporting that former Hollies lead vocalist Allan Clarke has recorded a new album titled Resurgence. It’s due out via BMG Worldwide on September 20, with the first single, “Journey Of Regret,” arriving July 12. It would be Clarke’s eighth solo effort, but the first in almost 30 years. I’m definitely looking forward to hearing this.

The 12th Annual A Day In The Country music festival takes place at The Hideout this Sunday from 2:00 to 11:00 p.m. 10 acts are scheduled to perform on the Backroom Stage and the Front Porch Stage, including Gethen Jenkins, Summer Dean, Bonnie Montgomery, Marian Runk, Cox’s Army, and Girls Of The Golden West. The Hideout is located at 1354 W. Wabansia on Chicago’s north side.

Echo In The Canyon, director Andrew Slater’s 2019 documentary about the fertile music scene that developed in California’s Laurel Canyon during the 1960s, opened tonight at the Music Box Theatre. The film features interviews with Graham Nash, Brian Wilson, Ringo Starr, Eric Clapton, Jackson Browne and Tom Petty. Additional show times for Echo In The Canyon at the Music Box are 2:00, 4:30, 7:10, and 9:15 each day from tomorrow through next Thursday.

Tickets are now on sale for Buddy Guy’s September 6 show at The Arcada in St. Charles. Guy was the secret special guest for the Hot Stove Cool Music event at Metro a few weeks back and he had the crowd rocking with his amazing vocals and guitar playing. Another noteworthy gig coming up at The Arcada is Chris Isaak on August 9. Isaak’s Roy Orbison style vocals and twangy guitar playing are particularly impressive on his vintage material like “Pretty Girls Don’t Cry,” “Dancin’,” and “Back On Your Side.”

Northwest suburbanites have good reason to look forward to the rebirth of the Des Plaines Theatre now that Ron Onesti, who books shows for The Arcada, has been put in charge of the entertainment.

Happy Birthday to Joey Molland of Badfinger. I’ve seen him at Fest For Beatles Fans – Chicago a few times, and he’s been energetic and engaging both off and on stage

Chicago power trio Toy Robots will perform Cream: A Tribute To Eric, Jack and Ginger on July 5 at the Metropolis Performing Arts Centre in Arlington Heights. A week later, at that same venue, Soundtracks Of A Generation will present A 50th Anniversary Tribute To The Woodstock Era.

The Regrettes are finally giving us a full-length follow-up to their impressive debut Feel Your Feeling Fool. The new effort is titled How Do You Love? and comes out August 9. The Los Angeles-based quartet has a gig coming up at Metro in Chicago on October 11, and in the meantime, has released the album’s first single "I Dare You."

Chicago-based indie/roots rock label Bloodshot Records will be celebrating its 30th Anniversary at the Square Roots Festival in the Lincoln Square area on July 13. Murder By Death, The Mekons, and The Vandoliers will take part in a tribute to the late Andre Williams. The Bloodshot All-Stars Band and other special guests will also be on hand.

Kokandy Productions will present Head Over Heels, the gay-centric and anachronistic Broadway musical based on songs by The Go-Go’s, from July 1 through August 25 at Theatre Wit on Belmont Avenue. By the way, “Head Over Heels” is one of the best songs The Go-Go’s ever recorded.

Reason number 17, 502 why I’d like to visit England again: The Clissold Arms pub in London has an entire room devoted to photos and memorabilia of The Kinks.

Scott Freiman, a composer and producer, as well as an expert on The Beatles, will present Deconstructing The Beatles’ Magical Mystery Tour on Sunday, July 7 at 11:30 a.m. and Wednesday, July 10 at 7:00 p.m. at The Music Box on Chicago’s north side.

Actress Ellie Kemper’s book My Squirrel Days comes out in paperback on July 2. Among other things, it covers her time on the TV shows The Office and The Unbreakable Kimmie Schmidt.

The Weeklings’ new single/video “I Want You Again” is now available. People who have attended Fest For Beatles Fans no doubt have fond memories of this band’s ability to mix covers of songs The Beatles wrote but never recorded, with catchy, Brit Invasion originals.

Guaranteed to break the ice at royal parties. Congratulations to Monty Python member Michael Palin on receiving knighthood from Prince William for his services to travel, culture, and geography.
Posted by Terry Flamm at 8:47 PM