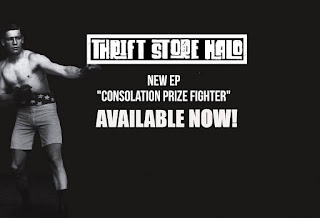 Chicago area power pop band Thrift Store Halo will be showcasing songs from its new EP Consolation Prize Fighter this Thursday night at the Ballydoyle Irish Pub in Downers Grove. The record’s being released on the Hi-Beam/Pravda Records/Pravda Music label and has already been getting airplay on the indie radio charts. There’s no cover charge and the music starts at 8:30 p.m.

This year’s Taste Of Des Plaines festival will have a Woodstock theme when it takes place on Friday, June 14 and Saturday, June 15. The town promises a psychedelic Ferris Wheel and a “Woodstock Revival” on that Saturday night with the cover bands Kiss The Sky and Creedence Revived. Still, looking at the Saturday, June 15 schedule, the act that jumps out at me is Backdated, and they go on at 3:00 p.m. Even if Backdated isn’t part of the Woodstock bash, frontman Jay Goeppner knows 1960s rock inside and out, and his choice in covers is always impeccable.

I recently saw director Barak Goodman’s new documentary Woodstock – Three Days That Defined A Generation with a couple of friends at the Gene Siskel Film Center and our response was three thumbs up. The film delves into the background of the guys who organized the iconic rock festival, the social upheaval that preceded it, and the multiple wonders of Woodstock itself. Major heroes who emerge in this film include the hog farmers who kept things organized as best they could under the circumstances, and Richie Havens, who was unexpectedly thrust into the opening act slot and created the song “Freedom” on the spot. Woodstock – Three Days That Defined A Generation runs through this Thursday at the Gene Siskel Film Center.
Posted by Terry Flamm at 9:35 PM