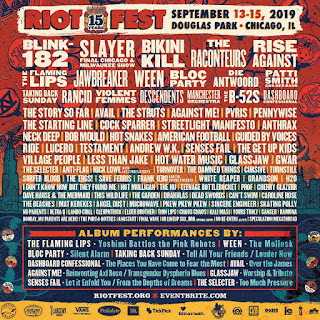 Riot Fest will celebrate 15 years of bringing counter-culture and alt rock music to Chicago on the weekend of September 13 – 15. The recently announced schedule includes The Raconteurs; Nick Lowe and Los Straitjackets; The Selector; The Flaming Lips; Patti Smith and her band; Violent Femmes; The B-52’s; Bob Mould; Guided By Voices; and The Beaches. Tickets went on sale earlier today.

The Graham Crackers Comics location at 3162 N. Broadway is presenting CHIDRINK AND CADRAWGO tomorrow night from 7:00 to 9:00 p.m. It’s being billed as Chicago’s Highest Rated Drink and Draw, and supplies will be provided.

Tickets went on sale today for Chris Hillman and Herb Pedersen at Old Town Scholl of Folk Music on October 13; Ladytron at Metro on December 11; Ingrid Michaelson at The Vic on October 19; Archie Powell and The Exports, with Mutts, Lung, and Vamos at Cobra Lounge on June 29; Willie Nile at SPACE on October 18; and UB40 featuring Ali Campbell and Astro, Shaggy, and Steel Pulse at Hollywood Casino Amphitheater on September 18.

CAKE - The Chicago Alternative Comics Expo comes to the Center on Halsted for a celebration and marketplace of independent comics tomorrow and Sunday.

Barak Goodman’s new documentary Woodstock - Three Days That Defined A Generation is having its Chicago premiere tonight at the Gene Siskel Film Center and run through June 6.

Van Go Red Wigglers, MOULTON, and M. Winfield McEwen from Black Cat Heart Attack are slated to perform at the Porchfest Lakeview Chicago festival being held next Sunday, June 2 at 1309 W. Wolfram Street in Chicago. All ages are invited, and it’s suggested that you bring a cooler and lawn chairs. The event last from 2:00 p.m. to 5:00 p.m.

Al Stewart returns to City Winery Chicago next Monday, with The Empty Pockets as his opening act.

Black Ensemble Theatre continues its popular series of shows honoring legendary African American performers with its production of Style And Grace: In Tribute To Lena Horne and Nancy Wilson. It runs through June 30.

Ghostlight Ensemble will perform The Selfish Giant at Otherworld Theatre June 8 through June 30 on Saturdays and Sundays. Maria Burnham’s play is based on the Oscar Wilde short story of that same name, and is meant to warn audiences of all ages of the pitfalls of selfishness.

Music On Stage wraps up its production of The Producers – A Mel Brooks Musical at Cutting Hall in Palatine this weekend.

Four Chords and a Gun, actor John Ross Bowie’s drama about The Ramones recording their End Of The Century album under the guidance (influence?) of Phil Spector, continues its run at The Broadway Playhouse in Chicago.