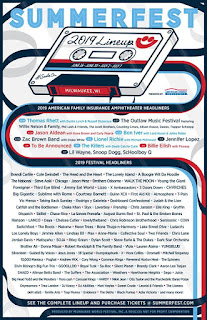 Summerfest, Milwaukee’s annual outdoor music bash, has announced its 2019 schedule, which once again showcases several genres of music. Willie Nelson; Death Cab For Cutie; Brandi Carlile; Chvrches; Courtney Barnett; Rodrigo Y Gabriela; Catfish And The Bottlemen; Liz Phair; The Roots; Steve Earle And The Dukes; Robert Randolph and The Family Band; X; Guided By Voices; 10,000 Maniacs; The Spinners; and Willy Porter are among the scheduled acts. SummerFest runs from June 26 to June 30, takes a breather, and then continues July 2 to July 7.

There are four major art fairs coming up in Chicago in the next two weeks. The 57th Street Art Fair and the Gold Coast Art Fair take place next Saturday and Sunday, and The Old Town Art Fair and the Wells Street Art Festival will be held on Saturday, June 8 and 9. Other art fairs on the horizon include Millennium Art Festival on June 28 through June 30 and Artfest Michigan Avenue on July 19 and 20.

Filmmaker Balin Schneider is working on a documentary titled Material Issue And The Power Pop Renaissance. The band’s drummer Mike Zelenko recently posted about the project on Facebook and suggested people contact Schneider with any MI anecdotes or info they might have.

The Belmont/Sheffield Festival runs tomorrow and Sunday, with the highlight being a 4:15 p.m. show by The Handcuffs. On Monday, you can catch The Handcuffs at Montrose Saloon on Chicago’s north side.

Van Go, Red Wigglers, MOULTON, and M. Winfield McEwen from Black Cat Heart Attack are slated to perform at the Porchfest Lakeview Chicago festival being held next Sunday, June 2 at 1309 W. Wolfram Street in Chicago. All ages are invited, and it’s suggested that you bring a cooler and lawn chairs. The event last from 2:00 p.m. to 5:00 p.m.

Comic Con Revolution will be held next Saturday and Sunday, June 1 and 2, at the Donald E. Stevens Convention Center in Rosemont. The event promises comics, creators, toys, panels, a cosplay contest and special guests.

Music On Stage’s production of The Producers – A Mel Brooks Musical opened tonight at Cutting Hall in Palatine and will this weekend and next.

The Chicago Underground Film Festival will run from June 5 to June 9, primarily at the Logan Theatre. It’s billed as the longest running underground film festival in the world.

Louder Than Words: Rock Politics Power opened today and will run through the end of August at the Museum Of Broadcast Communications in Chicago. The multimedia exhibit employs videos, photos, newspapers, and other memorabilia to explore how rock music has influenced and has been influenced by society from its earliest days. General admission is $18.

This year’s Nowhere Else Festival kicked off today in Martinsville, Ohio and runs through Sunday. Founded by Linford Detweiler and Karin Bergquist of the Cincinnati-based Over The Rhine band, it’s being billed as, “A Weekend Overflowing With Music, Art, Earth and Sky.” In addition to Over The Rhine, the other acts scheduled include Band Of Sweethearts; James McMurtry; Birds Of Chicago; John Paul White; Leigh Nash; Joan Shelley; and Carrie Newcomer.

EXPO ’76 will mark a career milestone with its 10 Years Of Musical Triumph event next Friday night at Martyrs’. They’ll be joined by their frequent cohorts The Total Pro Horns, along with special guest vocalists Kelly Hogan and Robert Cornelius. Tradition dictates that a 10th anniversary be celebrated with tin or aluminum, and at least one website notes the daffodil is the official flower of the 10th wedding anniversary. Plan your gifts for EXPO ’76 accordingly.

The fun and cleverly named power pop band The Bishop’s Daredevil Stunt Club has a record release show coming up next Friday, May 31 at the GMan Tavern. Gal Gun and the Mark Watson Band will also be on the bill that night.

Barak Goodman’s new documentary Woodstock - Three Days That Defined A Generation will have its Chicago premiere at the Gene Siskel Film Center next Friday, May 31, and run through June 6.

Four Chords and a Gun, actor John Ross Bowie’s drama about The Ramones recording their End Of The Century album under the guidance (influence?) of Phil Spector, continues its run at the Broadway Playhouse at Water Tower Place in Chicago through June 2.

CAKE - The Chicago Alternative Comics Expo comes to the Center on Halsted for a two-day celebration and marketplace of independent comics next Saturday, June 1 and 2. Special guests include Ezra Claytan Daniels, Nicholas Gurewitch, and Rosemary Valero-O’Connell. Admission is free.

The Joliet Library’s 10th Annual Star Wars Day takes place next Saturday, June 1 from 11:00 a.m. to 4:00 p.m. The festivities will include a parade, games, costumes, live music, and food vendors.
Posted by Terry Flamm at 9:55 PM