whitewolfsonicprincess - The Alternate Boot Vols. 1 and 2 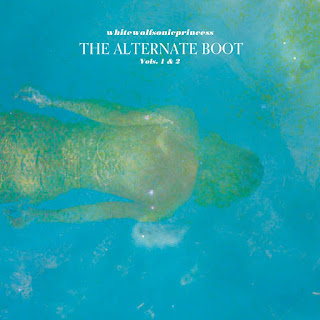 Those of us who first encountered Carla Hayden and James Moeller performing with their Black Forest theatre group probably have an advantage navigating the mystical lyrics of its musical offshoot whitewolfsonicprincess. The band has definitely established its own identity, but it still retains theatrical elements. On The Alternate Boot Vols. 1 and 2, whitewolfsonicprincess once again weaves energetic guitars and percussion through otherwise slow-moving arrangements.

Like U2 on its recent releases, whitewolfsonicprincess seems obsessed with the darkness and bad will that engulfs the modern world but feels there’s a light that can save us. “So Clear” invokes visions of a holy trinity as Hayden sings, “In forgiveness they cut through despair./Their lips painting words on the air.” Hayden takes an ethereal approach to her vocals, while Moeller’s singing is more conversational. They frequently join together on the chorus.

Moeller’s sense of loss regarding global unrest is unmistakable on the gritty “Sadness In The World,” but he defiantly proclaims, “Let’s paint it in the colors of love.” Hayden’s voice underscores the magic of “Dance A Wave” as she declares, “The ocean was my love./The darkness knew my name.” “I Close My Eyes” has a bluesy feel that also echoes the Jimi Hendrix rendition of Dylan’s “All Along The Watchtower” and “Brown Eyes” offers an enticing mix of adventurous and intricate instrumentation.
Posted by Terry Flamm at 10:09 PM