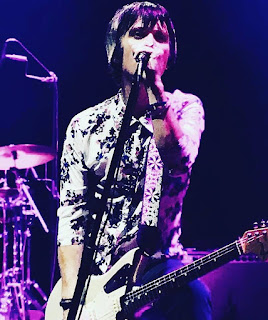 Hi Hello, Johnny. Welcome back to Chicago. Johnny Marr’s USA Comet Tour 2019 arrives in Chicago this Monday, May 13 for a show at The Vic Theater. Call The Comet, his third straight solo masterpiece, came out in 2018.

Slumgullion didn’t appear in its usual Friday night spot due to my wife Pam and I attending the ArtReach Educational Theatre and Spotlite Theatrix production of Mamma Mia at Cutting Hall in Palatine. I’m not an avid ABBA fan, but I believe that this type of production—where kids are introduced to the performing arts with mentoring from adults—should be encouraged. All of the adult cast members sang well; most of the kids put their hearts into it; and the finale had a big, good-time feel.

Tickets are now on sale for Bishop’s Daredevil Stunt Club, Gal Gun, and the Mark Watson Band at GMan Tavern on May 31; Hot Stove Cool Music With Peter Gammons and More at Metro on June 7; Megan McDonough at SPACE on July 6; the Neo Reunion at Metro on July 20; New Duncan Imperials at FitzGerald’s on July 27; and Nots and Olivia Neutron-John at Subterranean on June 4.

International Pop Overthrow - Liverpool, which is the second hottest topic in the UK right now—next to the new royal baby—kicks off this Tuesday, May 14 and will run through May 21 at the Cavern Pub and Cavern Club. The event brings in acts from around the globe, including Yanks like The Bishop’s Daredevil Stunt Cub and The Jeremy Band. The IPO website has the full schedule.

This week’s edition of Redeye includes the Chicago free paper’s annual festival guide. Compiled by Aine Dougherty, it provides an amazingly diverse schedule of outdoor events coming up from May through September. I always keep this list as a resource to make sure I don’t miss any of my favorite events.

Former Houndmouth vocalist Katie Toupin has a gig coming up at Schubas next Sunday May 19. Toupin has been employing an effective social media blitz to promote her first solo effort, Magnetic Moves, which is due out June 14.

The Handcuffs plan to return to Chicago’s outdoor festival scene with a “big, long, rocking set” at the Belmont/Sheffield Street Fest on Saturday, May 25. I’m guessing a few new tunes may turn up at that gig since the band has been working on its next album for a while now.

Girls Rock! Chicago is having a fundraiser next Sunday, May 19 at Sleeping Village on Belmont Avenue.

There’s a triple bill of Go Time, The Spindles, and 45 Souls coming up on May 30 at Martyrs’ on Lincoln Avenue. The first two acts have garnered praise here on Broken Hearted Toy for their recordings and live shows; 45 Souls is a roots rock, American duo that I’ve haven’t seen yet. Their latest CD, Free, came out early last month. Showtime is 8:00 p.m.

CAKE - The Chicago Alternative Comics Expo comes to the Center on Halsted for a two-day celebration and marketplace of independent comics on June 1 and 2. Special guests include Ezra Claytan Daniels, Nicholas Gurewitch, and Rosemary Valero-O’Connell. Admission is free.

L7 recently released its latest album, Scatter The Rats, and will most likely be playing songs from it when they rock the Metro on May 21. The four-woman band was originally part of the grunge scene and reformed in 2017.

Vintage Garage Chicago has a flea market featuring clothing, jewelry, and assorted other items coming on May 19 in Evanston. Admission is $6.

Robbie Fulks will be performing Doc Watson songs at 2:00 p.m. at the Evanston History Center next Sunday, May 19. The show is part of the Out Of Space series created by the suburb’s well-known music venue SPACE.

The Young Authors organization is offering a Write To The City Summer Camp for educators and aspiring poets and activists (ages 12 – 25) at the University of Illinois on July 8 through July12.

The 7th Annual Chicago Critics Film Festival, which bills itself as “The only film festival created and curated by a film critics association,” starts next Friday, May 17 and runs through May 23 at the Music Box Theatre.
Posted by Terry Flamm at 10:53 PM