Everything But Breakfast For Four Hundred Thousand People 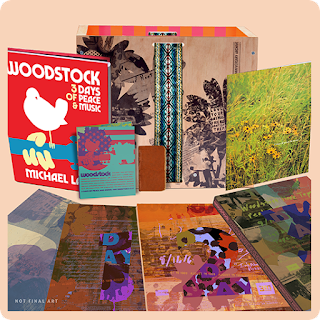 The new documentary Woodstock – Three Days That Defined A Generation has its Chicago premiere tomorrow night at the Gene Siskel Film Center on State Street. Director Barak Goodman’s film features footage that’s never been seen before, and serves as a fitting way to start a summer that’s bringing a number of ways to celebrate the 50th Anniversary of the iconic rock festival. There will be tribute concerts in addition to screenings of Goodman’s film, and a multi-CD box set for people who want to get their hippie on in the privacy of their living rooms.

As reported on The Second Disc website, Rhino plans to release Woodstock - Back To The Garden: The Definitive 50th Anniversary Archive. It’s a 38-CD box set that captures the Woodstock experience from start to finish, including 267 previously unreleased songs and several announcements. It comes with a hardbound book by Michael Lang, a replica of the original program, Henry Diltz photo prints, and a life-size hologram of Wavy Gravy serving breakfast. Just kidding about that last part.

At the Metropolis Performing Centre in Arlington Heights, Soundtracks Of A Generation will present its 50th Anniversary Tribute to the Woodstcok Era on July 12. The live performances of songs by Crosby, Stills and Nash, Santana, Jefferson Airplane, and other acts will be augmented by a “documentary style narrative that recalls and explains the time frame.”

For a Woodstock-related experience, check out the Louder Than Words – Rock Power Politics exhibit at the Museum of Broadcast Communications. It’s just down the street from the Gene Siskel Center, and runs through the end of August. Echo In The Canyon, Andrew Slater’s new documentary about L.A.’s Laurel Canyon scene in the 1960s, comes to the Music Box Theatre on Chicago’s north side on June 21. Jakob Dylan, who appears in the film, will be on hand for opening night.
Posted by Terry Flamm at 10:01 PM