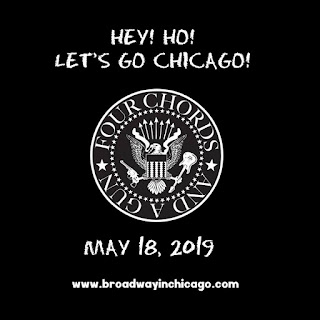 Four Chords and a Gun, actor John Ross Bowie’s drama about The Ramones recording their End Of The Century album under the guidance (influence?) of Phil Spector, opens tomorrow night at The Broadway Playhouse in Chicago. The official website stresses this is not a musical, which makes me think it might be like Aftermath, Ronan Marra’s terrific Rolling Stones play that was performed by Signal Ensemble back in 2010. Four Chords and a Gun, the website explains, is “A Play Followed By A Concert.” It runs through June 2.

Speaking of The Rolling Stones, they’ll kick off their rescheduled No Filter Tour with gigs at Soldier Field in Chicago on June 21 and June 25. A recent clip of Mick Jagger practicing his dance moves proves he’s still more agile than a lot of people on this planet.

The 7th Annual Chicago Critics Film Festival, which bills itself as “The only film festival created and curated by a film critics association,” opened today and runs through May 23 at the Music Box Theatre.

Tickets went on sale today for Waterboys at The Old Town School Of Folk Music on September 29. They’ll be doing two shows that day, one at 5:00 p.m. and one at 8:00 p.m.

Courtney Barnett will be among the headline acts at this year’s Taste of Chicago. She’s scheduled for July 10, with Sunflower Bean as the opening act. India.Arie and Meshell Ndegeocello share a double bill at The Taste on July 14.

The 10th Annual Chicago Zine Fest - A Self-Publishing Celebration has been staging events the past few days, and will wrap up with its Exhibition Day tomorrow at Plumbers Union Hall just west of downtown Chicago. More than 250 self publishers will be on hand.

Former Houndmouth vocalist Katie Toupin has a gig coming up at Schubas this Sunday to showcase her new solo effort, Magnetic Moves. The album is due out June 14.

L7 will most likely be playing songs from their recently released album Scatter The Rats when they rock the Metro this coming Tuesday. The four-woman band was originally part of the grunge scene and reformed in 2017.

Vintage Garage Chicago will hold a flea market this Sunday featuring clothing, jewelry, and assorted other items. Admission is $6.

Robbie Fulks will be performing Doc Watson songs at 2:00 p.m. at the Evanston History Center this Sunday as part of the Out Of Space series created by the suburb’s well-known music venue SPACE.

International Pop Overthrow - Liverpool continues its run at the Cavern Pub and Cavern Club through this Tuesday, May 21.

If you enjoy The Handcuffs’s show at the Belmont/Sheffield Street Fest next Saturday, May 25, you can catch them again two days later at Montrose Saloon. They’ll be sharing a double bill with The Convincers. It’s a record release party for The Convincers.

Chicago’s Irish Music Community suffered a major loss this week with the passing of Noah Rice, a long-time teacher at the Irish Academy Of Music and founding member of the Baal Tinne band. Rice was a familiar face at the annual Irish Fest at the Academy, as well as the Celtic Fest that used to held in Grant Park. His students and family will no doubt carry on his love of Irish music and culture.
Posted by Terry Flamm at 10:08 PM