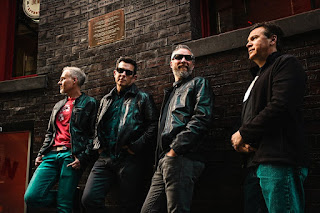 The Bishop’s Daredevil Stunt Club’s show this Friday night at the GMan Tavern on Clark Street is a celebration for the band’s latest album as well as the launch of the indie label releasing it. End Over End is due out soon on Big Blast Records, the revived indie label run by WNUR radio’s Power Pop Shoppe host Kirk Fox and local musician Mark Watson. In a review of The Bishop’s Daredevil Stunt Club’s 2017 album Don’t Buy This Record, I described it as “a ten-song effort that mostly follows in the tradition of fellow Midwestern acts like Wilco and The Webstirs, but also explores 1980s style synth rock.” The Mark Watson Band’s Beautiful EP has also come out on Big Blast, and they’ll be at GMan this Friday as well. The power pop quartet Gal Gun is also on the bill. GMan Tavern is located at 3740 N. Clark, the music starts at 7:30 p.m.

The triple bill of Go Time, The Spindles, and 45 Souls coming up this Thursday at Martyrs’ on Lincoln Avenue has a special bonus. Drummer Brad Elvis, currently with The Handcuffs and The Romantics, is going to join The Spindles for a few songs by his former (and still beloved) band The Elvis Brothers. The Spindles covered the Elvis Brothers song “Santa Fe” on their most recent album Past and Present. Showtime is 8:00 p.m.

On the following night at Martyrs’, EXPO ’76 will mark a career milestone with its 10 Years Of Musical Triumph event. They’ll be joined by their frequent cohorts The Total Pro Horns, along with special guest vocalists Kelly Hogan and Robert Cornelius.
Posted by Terry Flamm at 9:45 PM