Start Me Up - This Friday 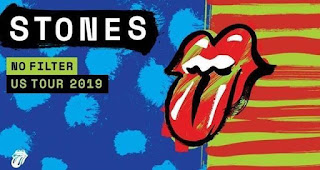 It’s so great to see Mick Jagger fully recovered from his recent heart surgery and ready to kick off the No Filter Tour with The Rolling Stones. It all starts here in Chicago this Friday night at Soldier Field on the city’s lakefront. A recent photo on social media looks like guitarist Ronnie Wood is already in town and having fun. WXRT will be featuring The Stones all day on Friday and if you still have a copy of last Sunday’s Chicago Tribune, check out rock critic Greg Kot’s pictorial history of the band on the back page of the Arts and Entertainment section.

And sincere best wishes and good vibes to people everywhere who are facing or recovering from heart surgeries or other major operations.

Echo In The Canyon, director Andrew Slater’s 2019 documentary about the fertile music scene that developed in California’s Laurel Canyon during the 1960s, opens this Friday night at the Music Box Theatre on Southport. The film features interviews with Graham Nash, Brian Wilson, Ringo Starr, Eric Clapton, Jackson Browne and Tom Petty. Narrator Jakob Dylan will be on hand for opening night.